The most powerful thing in Hollywood isn’t technology or talent. It’s payroll.

“I know there’s a joke that there are no rocket scientists in Hollywood, but one of our co-founders was, in fact, a NASA rocket scientist,” says Ron Cogan, VP of Communications at industry payroll giant Entertainment Partners. “His brother was in casting and said ‘If you want to apply your software skills to our industry, you should know that there is no standard cost reporting tool that the industry uses. If you can crack that, you’d be set.’ So he came out to Hollywood and created the standard industry cost report and quickly realised wisely that the largest spend in production is labour. He thought, ‘If we can hook up some payroll component to this, that might be really synergistic.”

Studios loved the idea. In the production of a film there are many different fee structures, union regulations and specially negotiated contracts involved that processing payroll on a production by production basis is an accountancy nightmare. A TV series didn’t want to have to hire an actor, then terminate her, then hire her again, then terminate her and so on…they were happy to let Entertainment Partners deal with the entire headache.

The company grew, continuing to acquire production management resources, including Central Casting and the industry standard budgeting and scheduling software, Movie Magic, and it became 100% employee owned. When the founders retired in around 2002, Entertainment Partners was in a position to be the go-to solution for a host of behind-the-scenes processes, including developing a private insurance product which took a load off the studios who were concerned about the bureaucratic challenges posed by President Obama’s Affordable Care Act.

“It was then we realised that the studios are looking to us to keep them compliant and, in fact, to modernise them,” says Cogan. “As much as technology has revolutionised the film industry, it is all contributing to what appears on screen. There are no development dollars going into revolutionising those back office processes that haven’t changed since the days of Cecil B. DeMille.” 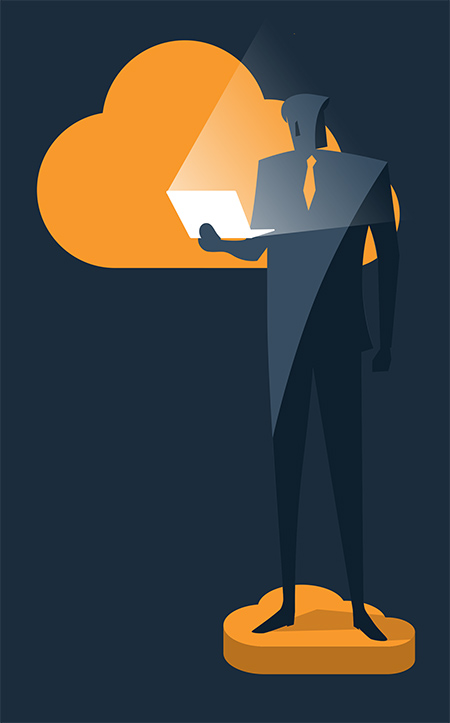 Entertainment Partners decided to take up the task of digitising the operation of the industry’s back office systems, from time cards that crew can fill out on their smartphones to calculating carbon offsets for productions.

The need for flexibility, scalability and universal access meant a speedy adoption of cloud-based infrastructure. Initially these were built on Entertainment Partners’ own on-premises servers.

“In our private cloud, we had full control of everything. But as we scaled, it became more and more challenging,” says Darren Ehlers, Entertainment Partners’ SVP of Product Management. “To have the security and other requirements in place became more challenging to manage, and so we made the decision to migrate everything to AWS.” Entertainment Partners’ migration of its entire business to AWS cloud services took about nine months from start to finish.

“It went flawlessly. Our users saw no impact whatsoever,” continues Ehlers. “They left on a Sunday morning and came back on a Monday morning and off they went. They really didn’t notice a difference. In fact, they saw some performance improvements, which is great. Since then we’ve been able to deploy some security changes that we wanted to deploy, and we’ve added some capabilities for disaster recovery.”

Given the big studios’ deep concerns about information security, Entertainment Partners wondered if there would be any objections to the involvement of an off-premises third partner.

“We got no pushback from any of our clients,” says Ehlers. “In fact, a lot of them were happy that we were moving  to AWS, away from our own private environment. Some of them had already adopted AWS, so they were comfortable with it. The perception seems to be that AWS is very secure in the market, and customers saw the move as an improvement in security.”

Getting smart with scheduling

Entertainment Partners has been working hard to guarantee the studios a safe data environment. A leaked script, or even a call sheet, could wreck a shoot, not to mention the reams of contract and financial data generated by a production.

Scenechronize was one of the first Entertainment Partners production tools that was placed fully into AWS. Scenechronize is a cloud-based scheduling and production management platform that works across devices and houses every document generated by the production. Its capabilities include easy script breakdowns, slide creation, watermarking and sophisticated permissions management.

“Scenechronize and SmartAccounting are the tools and products most used by our customers, and, of course, they’re the largest in the industry too,” says Martin Mazor, Entertainment Partners’ chief information security officer.

Having a system that approached zero downtime was also essential. “We wanted to go from a two-nine to four-nine availability metric: from 99% to 99.99% availability,” says Mazor. “And that four-nine model, in the IT world, is an incredibly hard thing to do. A four-nine (99.99%) availability metric is saying you’ve got roughly five minutes of unplanned downtime a month. And we got there based on AWS’s auto-scaling capabilities and a multi-region model.

“To do that, not just the application, but the engineering of the product infrastructure itself has to be built around that four-nine model. For us, both Scenechronize and SmartAccounting are built in two regions in a parallel model. We’re using both US West and US East AWS data centres, and they replicate in real time between themselves. They’re also in two different data centres in each of those two regions. So we’re replicated into four data centres. A lot has to happen before a user is impacted.”

It looks like studio back office infrastructure really is moving on from the days of Cecil B. DeMille. But one Hollywood truism still remains unalterable: when a studio head tells you to make something work, it had better work – or else. Entertainment Partners is definitely making it work.

“All of this may seem like a bit of overkill in some situations,” admits Mazor, “but getting that 99.99 availability metric  is paramount  for us.

This article first appeared in the March 2019 issue of FEED magazine.