Whether you call it a ‘Frisbee’ or a ‘disc’, ultimate is moving out of its counterculture roots and into the sports mainstream. The AUDL, ultimate’s governing body for North America, is using video streaming to reach new fans

The American Ultimate Disc League (AUDL) was founded in 2012 and consists of 21 semi-professional franchises in the US and Canada. It was kicked off (flung off?) when founder Josh Moore wrangled eight owners willing to put money (not much money) behind the new teams. The next year saw more teams added, with one of the new team owners being Cisco’s Rob Lloyd. Using his substantial resources, Lloyd boosted the AUDL into its ‘2.0’ phase and became the league’s chairman. 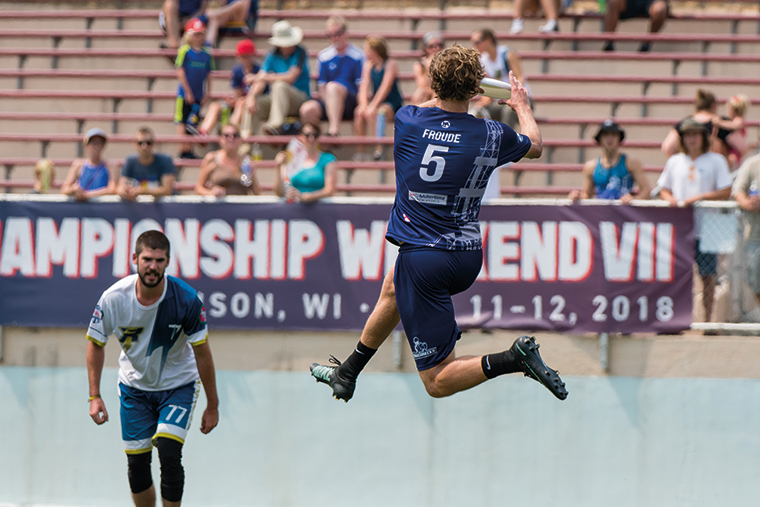 Streaming video of ultimate games was part of the league’s strategy from the very beginning and, in 2013, the AUDL launched UXTV, a simple website that allowed the league to embed livestreamed video. “We bought cameras and hired some camera people and some ultimate people to try to envision how these games would be streamed,” explains Tim DeByl, vice-president of marketing for the AUDL and head of the league’s video strategy.

DeByl was also part of the initial 2012 launch and, with partner investors, became owner of the Madison Radicals ultimate team. “Live streaming hadn’t really been done much. There was some streaming for the world events, but even that was with one camera and very simple,” he explains.

After a couple years with the UXTV platform, the AUDL caught the attention of ESPN, which was interested in streaming matches on the networks’s streaming service, ESPN3. In the meantime, DeByl and the AUDL team worked steadily with teams around the league to get it up to speed for ongoing, professional live coverage. They moved from their own homegrown streaming set-up and began to stream via Vimeo’s Livestream platform.

“We started doing tutorials at our owners’ meetings, trying to help the local teams to grow their own streaming,” says DeByl.  “We had this idea we would have a game of the week, Monday night football-style. We would send a full streaming team there and announcers. We hired Evan Lepler in 2015. He was announcing baseball, but was a former ultimate player. He now does all of our biggest games.” A production company, Fulcrum Media Group, was created, which is now responsible for producing all the top-level games.

On the trail of the saucers

The Frisbee was launched in 1948 by American inventor Fred Morrison. Originally called the Whirlo-Way and designed to be made of metal, Morrison’s disc was upgraded to a plastic version called the ‘Flyin-Saucer’. In 1958, Morrison sold the rights to Wham-O, which gave it the name ‘Frisbee’ (a name Morrison originally despised) after the Frisbie Pie Company, whose empty pie tins were favoured by students at Yale. And the rest is discoid history.

Morrison’s flying disc generated competitive sports almost immediately, imitating golf or various field sports, and Wham-O itself did much to promote organised activity around its product. In 1967, Wham-O vice president and inventor of the ‘Frisbee’ brand name, Ed Headrick, founded the International Frisbee Association (IFA), and also helped to establish the Professional Disc Golf Association (PDGA) to which he devoted the rest of his life. The World Flying Disc Federation (WFDF) is the international sports federation responsible for governance of flying disc games, including ultimate, disc golf, freestyle, guts and overall.

The first record of ultimate being launched as a sport was in 1968 when New Jersey schoolboy Joel Silver (not the famous producer) created an after-school team. Organised university tournaments, starting with a game between Rutgers and Princeton Universities, began in 1972.

Ultimate games can be played on grass, beach, sand or indoors. Grass games generally have teams of seven players; beach or indoor games, five players. The field is similar to a football pitch, 73m long with end zones 18m long. The disc may be advanced in any direction by passing to a teammate. Players can’t run with the disc. After catching a disc, the thrower has ten seconds to throw it on to someone else. Points are scored when a team catches a pass in the other team’s end zone.  The sport is recognised by the International Olympic Committee, but has yet to secure a spot in an Olympic Games.

Uncommonly in sports, flying disc games of all kinds generally have no referees. The games, even at high levels, are entirely self-officiating. 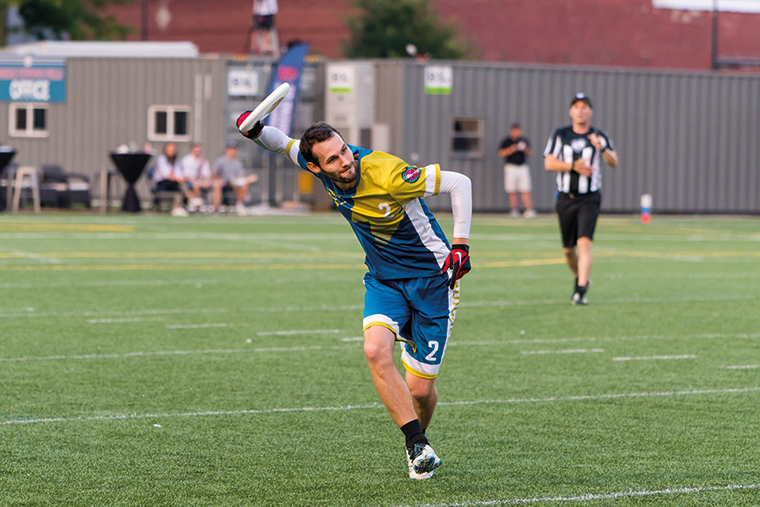 Last year, the AUDL decided to put all the remaining games onto a service called AUDL TV, which meant 130 games were livestreamed last season. The channel can be accessed via a monthly fee of $10, giving access to every game played across the league. The challenge now is to make sure that every ultimate team across the league – some of whom have little video production experience – is able to contribute high-quality content.

“We put in a lot of work to try to get the teams’ base-level streaming up to speed,” says DeByl. “We had Evan work with the teams’ announcers. We’ve written a lot of tutorials, and we’ve met with a lot of the stream teams. This season, we’ve managed to stream every game.”

He continues: “We would do a call with each stream team the week of the game to verify who the camera people were, who the announcer was and we did a stream test to verify they knew what they were doing. For a lot of it, we were already pretty happy with what they had done. A lot of teams had already been doing streams on Facebook or Twitter or YouTube.”

Pooling their experience of ultimate, there were discussions about how to best shoot different recurring moments in gameplay, including the choice of lenses and the height of the camera. “We generally have a 50 high, a 50 low and two end-zone cameras. But we’ve had to narrow it down sometimes for the stream. A lot of teams just have a high 50 cam and some sort of replay cam on the field,” explains DeByl.

For high-end games, the AUDL has also used drone coverage, which lends itself particularly well for a sport focused on an object that hovers. “We’ve also found that announcers are a very big part of this,” he adds. “You can have bad camera work and really good announcers and people will still be pretty happy. We work hard to get people who are knowledgeable. We have Evan, who is a professional, working with some of the announcers who are often retired ultimate players. They know the game well, but haven’t been in the booth much. Evan really helps them prepare well for a game, even showing them how to take notes beforehand, how to announce names, knowing what the stats are…”

However, DeByl says there have been a few glitches involving bandwidth problems. The teams move stadiums frequently and not every location has been vetted for the dependability of its LTE coverage. “Hiccups can happen when a team tries a new stadium, and they had great internet when they tested it on Friday, but then on Saturday the service is intermittent. But generally it has gone really well.

“We had a lot of trepidation going into the season, because we hadn’t charged for streaming before. When you charge, it’s a different scenario from when you give something away for free. There can be a lot of angry emails every time a stream fails.”

While the season runs from April to July, the AUDL will still be working hard during the off-season to keep producing new content to retain current subscribers and attract new ones, and will be planning how to improve its coverage for next season.

“For 2020, we want more graphics and we want to standardise streaming packages. So far, it’s been the Wild West in terms of what the different teams have used for streaming – from vMix to Production Truck to OBS. It was a bit of testing ground to see what worked best for people. We’ll have an all-owners meeting in September to see what worked and what didn’t, and after that we’ll raise the bar,” says DeByl.

Guidelines for next season’s coverage will include instant replay and the standardisation of scoreboard graphics and opening AUDL animations. DeByl adds that vMix has come out as a favourite livestreaming software.

And the AUDL’s coverage is not just limited to streaming – the league has a deal with multi-platform sports network Stadium Sports for streaming and linear broadcast TV. “Ultimate is a really interesting sport for TV. It’s really highlight ready,” enthuses DeByl. “We feel like being on a platform like that has really helped us grow the league and the sport.”

Although the sport is based primarily in North America, DeByl says there are a notable number of AUDL TV subscribers from France and Colombia to watch the French and Colombian players who have joined the league. There is also a huge social media following from outside the US.

The key barrier to a flood of subscriptions from outside the US is that the Vimeo Livestream platform doesn’t yet have provision for localised currencies or different subscription models. “Right now, we have to stick to US dollars, and $10 can be a lot in countries like Colombia. Even in Canada, they’re having to pay in US dollars, so using localised currencies is a big part of our roadmap going forward,” he points out.

Vimeo Livestream is working with the AUDL on how to deliver the 2020 roadmap, but DeByl has been impressed with the solidity of the platform. “We can’t have streams going down, and Vimeo had perfect uptime, as long as the team on the ground could get the stream up and running. I don’t see us moving platforms any time soon.”

The AUDL puts social media at the forefront of its media strategy, going by the rule of thumb that ‘more is more’. Every camera angle gets uploaded to a central server, which allows editors to build highlights for social media. “We’ve found things like our highlight reels have been great for the growth,” says DeByl. “We have had our top ten on ESPN like 50 times. We aren’t the NBA, but we try to follow how they work – how they create highlights and instantly get them out on social media.”

He concludes: “Some people worry about the problem of cannibalising the linear broadcast, but we just want people to get interested in the league – and that will pay off in the long run.”