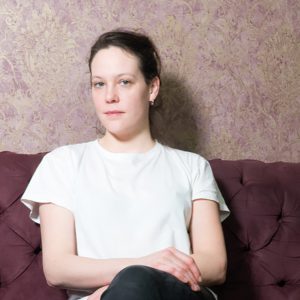 Exposed to sex acts, the AI offered descriptions like, “A woman in a red shirt is holding a remote”, “a woman is brushing her teeth with a toothbrush”, “a person is laying [sic] on a bed with a stuffed animal” and “a woman is taking a selfie in a mirror”.  Some of the descriptions are abstract enough to be Freudian poetry: “A close-up of a stop sign on a wall” and “a view of a city with a clock tower”. And of course, there is the inevitable “a person is holding a banana in their hand”.

“It was the first time I worked with neural networks for a project,” says De Jong. “It’s really interesting to use it as an art form, because you can create this distance between viewer and subject.” De Jong made the film in 2016 during her degree, when easily accessible neural net technology was still relatively new.

“What if the computer were a person? How would they look at this? It doesn’t have an opinion or personal experience.”

De Jong and a programmer used open source written code from NeuralTalk and an open source database. The neural network analysed images from the films grabbed every 15 frames or so.

“There was also an element of humour,” she says. “It couldn’t really read what was happening. What struck me is how limited it was, actually. It is smart in some ways – it could describe the action very well. Of course, it wasn’t someone ‘brushing their teeth’, but just based on a still, it could still understand the movement.”

She was particularly struck by how the AI wasn’t able to comprehend naked images.

“Even in a healthy, normal way, it just doesn’t read that. Anything that had something to do with sex or nakedness was transformed into this really abstract thing. After a while it got tiresome and repetitive.”

Most AIs, as they are currently trained, aren’t very good at describing humans without their clothes on. In those data sets, a human is a thing that has clothes on it. These smooth-surfaced objects with no recognisable sleeves, trousers, shoes are, to the AI mind, mysterious and alien. Machine learning is employed more widely now for purposes of content management and censorship, but these tools are still quite simple, and do no more than detect whether clothes are present.

“We also, as a society, think of sex and pornography as something very much apart from what we see normally,” notes de Jong. “It’s taboo. And so within the neural networks, they then also become a taboo.”

This article first appeared in the November 2019 issue of FEED magazine.