Audio qulity in online video is…variable. There’s the beautifully shot video with unbearably bad sound recorded on the camera’s built-in microphone. And there’s the webcam video with carefully recorded ASMR for sending chills down your spine. As producers, and viewers, come to realise just how powerful the headphone audio experience can be, they are turning to more sophisticated audio tech.

Sonic Presence is offering a solution called the VR15 Spatial Microphone, which uses an iOS or Android mobile device to record lifelike binaural audio which mimics human hearing response. The system features a microphone placed over each ear of the person recording, resulting in audio that reproduces the presence of actually being in the space, directly hearing the action as it is happening.

The VR15 came out of the decades-long audio expertise of Russ Hamm, Sonic Presence’s head of R&D and principal architect. The idea came one day when Hamm saw a New York street artist whose music he wanted to capture, but he thought that bringing in a high-end microphone and video gear would destroy the intimacy and spontaneity of the performance. The result was him developing a discreet spatial microphone worn on the ears that records exactly what you hear.

Hamm began by pairing the system with GoPro cameras, to facilitate easy recording in a multitude of settings. A year later the microphone was adapted for iOS and for Android. “In wearing these microphones, your audio point of view is exactly the same as your point of view when you are watching the scene,” says Hamm. “There’s a match between picture and sound, and that’s important in making you feel like you are there. A lot of audio is done with lavaliers that are close-mic’d, and really there is a disconnect between what you’re seeing and what the audio sounds like.” 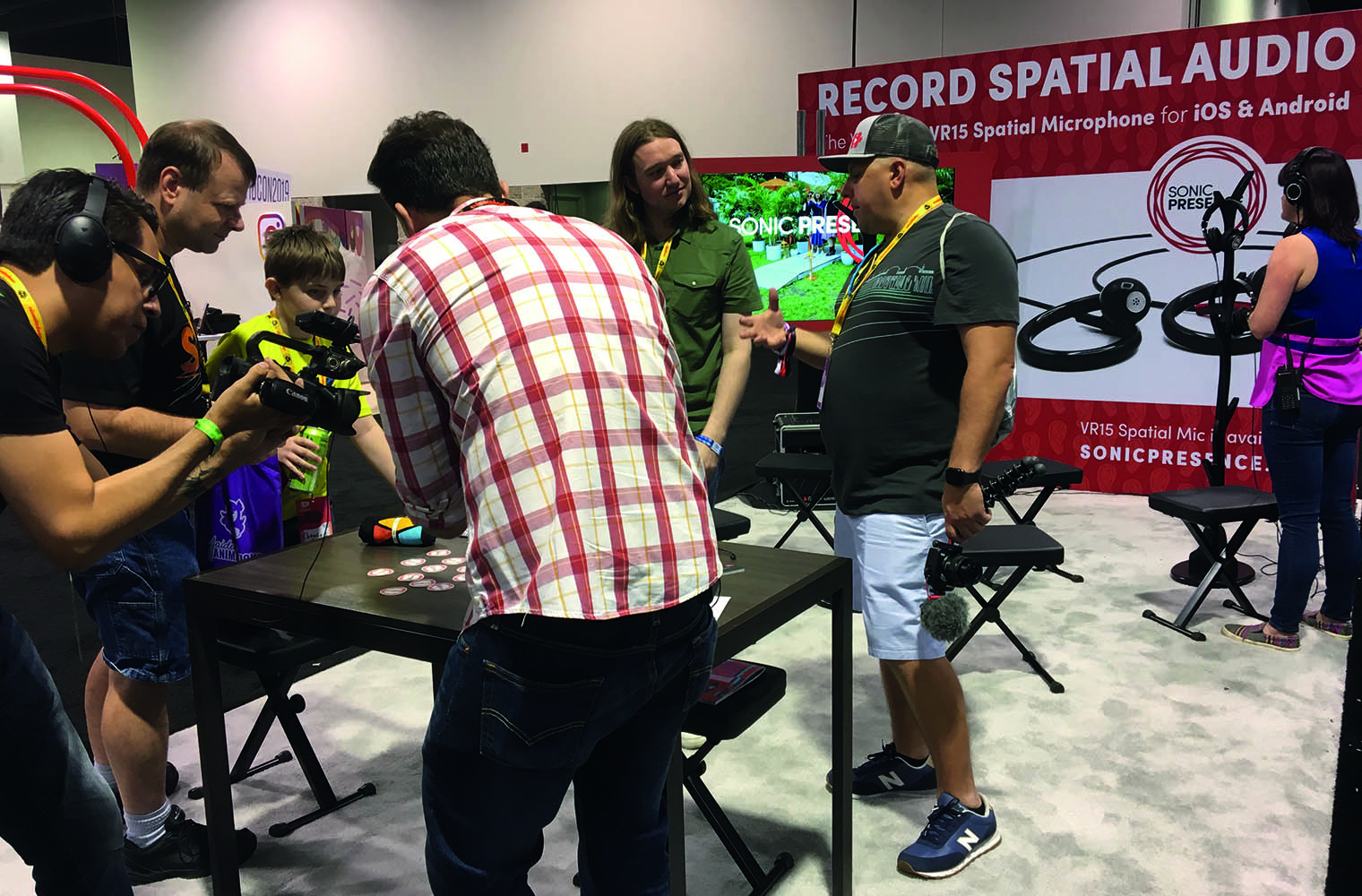 The binaural set-up also helps to enable the ‘cocktail party effect’, that capability of human hearing to select and understand a conversation in a noisy, crowded room, an environment which would produce only a wall of impenetrable noise if recorded by a single microphone.

“We did interviews at a barbecue, with a band playing, and we interviewed some people who were talking quite softly. But since we were able to reproduce the complete, three-dimensional sonic picture, the music from the band didn’t interfere, because you realise that the band is behind you, so your mind filters out that and you focus on the source in front of you, the people who you are interviewing. You can pick out various conversations going on around you.”

The Sonic Presence technology is actually relatively simple. Sonic Presence’s Michael Fremer, who approached the company as a sceptic, but is now part of the company’s core team, explains. “When we were at VidCon last summer (see the August 2019 issue of FEED) a lot of techie people who came to our booth said, ‘This sounds fantastic. What kind of digital signal processing are you using?’ And we said, ‘Nothing’. So they said, ‘Oh, so you’re doing the processing in the phone?’. And we said, ‘No, we’re not using the phone.’ They said, ‘Well, it must be in the application…’ and so on. There was a disbelief that something so simple could create this audio that we think in some ways surpasses the immersive audio people are doing for VR experiences.”

Considerable development however has gone into the interface and handshake between the microphones and the recording application on the mobile phone. The Sonic Presence VR15 is compatible with over a dozen applications for iOS and Android.

Sonic Presence isn’t the only binaural recording solution on the market. Neumann offers a human head-shaped binaural recording solution – designed to preserve the sonic reflection and absorption specific to human hearing – graded to be used for a variety of applications. Neumann’s KU 100 dummy head will set you back about £6800/$8000. On the more affordable side, companies like 3Dio offer binaural recording technologies, with microphones inside artificial ears, for around £500/$400, and a number of companies have earphone/mic combo solutions. Roland’s CS-10EM costs around £73/$55 and the Sennheiser Ambeo combines monitoring with recording. The Sonic Presence VR15 will cost $150.

Fremer says that Sonic Presence differs from other binaural recording solutions in its careful attention to the way it is capturing the sound. “We spent a few years nailing down the exact placement of the microphones, and testing out different sensors and microphones to find that exact sweet spot on the human head to be able to perfectly capture the spatial effect that is the result of human anatomy. The placement of our microphones, which is just a little in front of the earlobe, gives you a rock-solid centre image that a lot of binaural recording really misses. Sometimes in binaural recording you miss that direct centre.”

The placement of the microphones means there is no in-ear monitoring, as in the Sennheiser Ambeo. Sonic Presence’s developers believe that allowing a creator to hear real-world sound, just as a director would want to watch actors in real life rather than on a monitor, is one of their product’s strengths. “We’re happy to make a straightforward product that does one thing very, very well,” says Fremer.

Hamm was amazed at the positive reception the company had at last year’s VidCon. Run-and-gun creators, YouTubers and microbroadcasters are the product’s target customers. The solution is set to be available this month. “We are capturingthe audio in the widest dynamic range we possible can,” says Russ Hamm. “All the user has to do is put the sensors on their ears and press record. It’s a point-and-shoot device.”