Video vortex in the Mediterranean 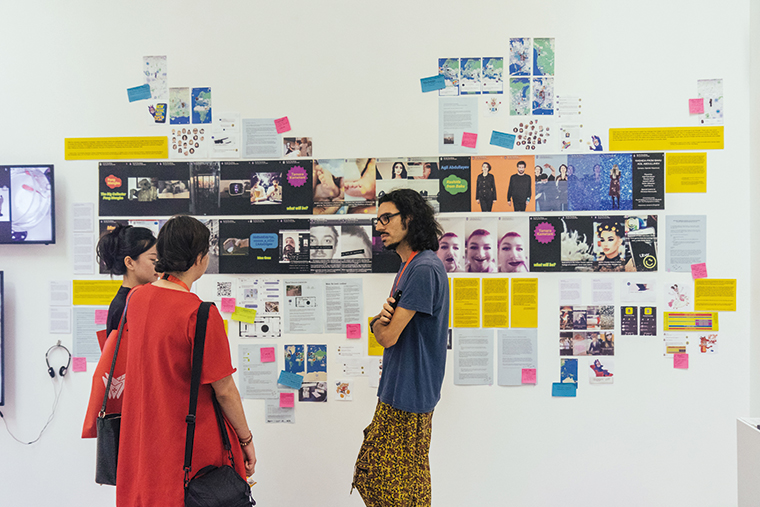 While the sun blazed over Malta’s capital Valetta, inside the cool vaults of Spazju Kreattiv arts complex, Video Vortex XII convened academics, artists and technologists from all over the globe to discuss the online video world, over four days in September.

Video Vortex began as an offshoot of the Institute for Network Cultures, founded 15 years ago by Dutch media activist and writer Geert Lovink. The Institute for Network Cultures created Video Vortex as a way to examine the rapidly changing digital media landscape, and also holds frequent conferences on the future of alternative currency models as part of a programme called MoneyLab.

The purpose of Video Vortex is to look deeply into issues around streaming media and to explore what they might mean for the future, socially, technologically and economically. Many participants are academics, from a variety of disciplines, presenting papers on their specialities.

Topics include the deeply esoteric, such as the presentation by Ana Peraica, art historian and author of Culture of the Selfie, who explored the implications of the mental and physical distortions of space that happen in a self-obsessed world.

She points to the literal confusion about space and distance that happens when excited selfie-takers unexpectedly walk off a cliff or ledge behind them (the wide-angle lens of most phones creates an illusion of greater distance). She noted that more people die in selfie photography than in war photography, and for some reason Croatia is a hotspot for these bizarre fatal accidents.

Ultimately, it is impossible to reproduce in an image the fullness of the human visual field, or the ongoing assemblage of details that ultimately makes up our visual frame of reference – something much more like an endless series of rapid close-ups than a single, wide VR-like field.

Dino Zhang, in his presentation ‘A Theory of Livestreaming Video’, looked for international unities in streaming culture, studying streamers from both West and East Asia.

In his research, Zhang looked particularly at live streamers on Chinese streaming platform Douyu, over months, watching how their audiences ebbed and flowed. And while streaming is big, he concluded that live streaming was a fully mature industry – “[It’s] very industrialised; there are companies now who train live streamers”. The truth is that streaming viewership is restricted to a very small number of people. Most streamers have little or no audience at all, while a few command most of the numbers.

In China, live streamers refer to each other as ‘water friend’

Zhang also noted the preponderance of what he called ‘hydrographic’ language in talking about online video: ‘streams’, work ‘flows’, data ‘lakes’, and YouTube’s similarity to a content ‘ocean’ . In China, live streamers refer to each other as ‘water friend’ . Looking at these metaphors is a way to gain insights, he said, surmising that the universally hydrographic language around online video was due to the ephemerality of the medium, the deep sense that it is not only infinitely malleable, but ultimately impermanent.

A Japanese word for live streaming, Zhang said, is ‘nanahosu’, which means ‘raw cast’ .  Again, something not fully present in this world. It’s as if streaming is always on the way from somewhere or to somewhere, but definitely not something permanent. 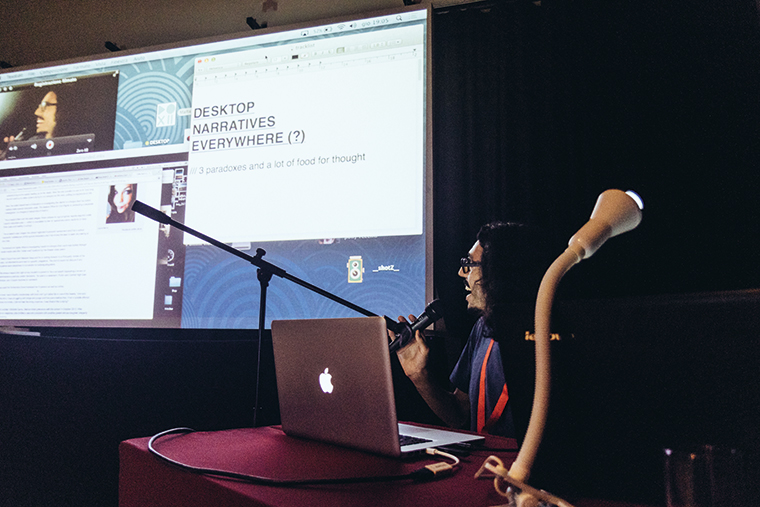 Video Vortex lectures included a study of the “desktop film” genre, embodied by movies like Cam and Unfriended.

Even obscure web video genres were given careful consideration at Video Vortex – although what’s obscure to the day-to-day linear world is huge hits online. Jake Wilson of the University of Warwick presented a paper on the ‘Playing From Another Room’ genre of online content.

‘From Another Room’ videos – which began ballooning as a meme in 2017 – generally present a popular song that has been subjected to audio filtering so it has the muffled, low frequency sound of music being played in another room. We’ve all experienced the effect – that distant thump-thump of music at a club when you’re in the toilets or the holiday songs on the radio downstairs when you’re in your bedroom wrapping presents.

The genre seems to tap into something very primal, invariably evoking in listeners memories of parties long-past, fantasies
of loneliness and separation, or moments of melancholic drama. The tracks are sometimes accompanied by nostalgic imagery, too – stock photos or archival American footage from the Cold War years appear to be popular.

Wilson’s paper theorised that the power of the genre came from a sadness driven by “the possibility of human contact” . His thesis was that the success of the genre was reflective of a society trapped inside platform capitalism – where humans are entirely immersed in a fully connected environment (like a big, global, digital party), but are permanently separated from physical contact (like a person locked away in a digital bathroom listening to the fun outside).

One afternoon session was devoted to journalism and activism. In the panel, journalist and activist Donatella della Ratta presented ‘The Vanished Image: Who Owns The Archives of the Arab Uprisings?’. Telling the story of her friend who had entrusted her with footage from the revolution in Syria before his murder by state authorities, she explored the issues of censorship and media control that work against such vital video material getting to the general public.

Media scholar Aishwarya Viswanathan presented her study ‘Staged Fear: Real and Imagined Audiences of Mob Lynching Videos in India’ . India’s ascendant extreme right has taken to recording its attacks on the country’s Muslim population, creating videos that have a bizarre sense of ritual about them, almost as if they were ‘how
to’ guides.

Viswanathan queried who the audience for these videos really is. Are they for recruitment? Are they meant to instill terror? Are they trophy records? She also noted that not all the videos are real. In some, it is an actor playing the victim. In others it is a real murder being committed. She was also bemused that her video study of the phenomenon was rejected by YouTube’s algorithms while some of the original lynching videos remained online. 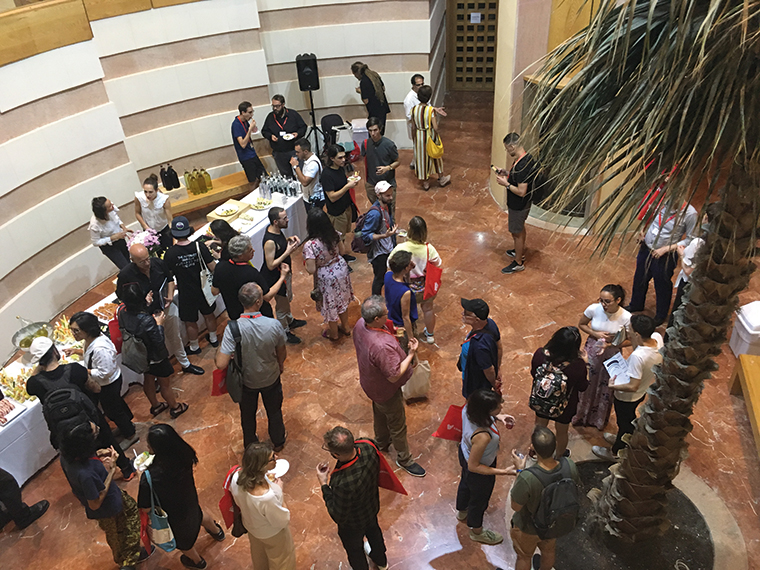 For the experimentally inclined, Video Vortex held a breakout session on ASMR, which allowed people to experience and discuss the phenomenon that has become an online media sensation. ASMR stands for autonomous sensory meridian response and is a nervous system reaction characterised by a tingling on the scalp or down the spine. The response is often induced by sound, often evoking a very specific (possibly delicate) texture, or by the sound of a close human whisper. Some ASMR YouTube videos get hundreds of thousands of views – some have sexual overtones, some help you get to sleep and some are just oddball fun.

For some of the attendees, it was the first exposure to the ASMR phenomenon and there was a lot of surprise at how mere internet audio could produce such a remarkable physical response. It brought up speculation on what the future interface might be between the virtual world and human physiology.

Video Vortex also included a film festival, screening experimental video pieces from around the world. This included, in some cases, the filmmakers in attendance and engaged in discussion about their work with attendees. 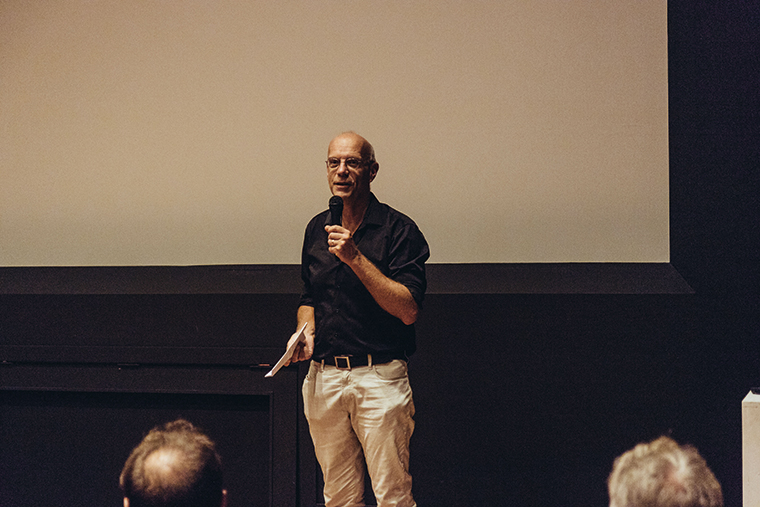 Writer and media thinker Geert Lovink started Video Vortex 15 years ago and was on hand to provide commentary and context.

Of particular note were Lotte Louise de Jong’s film BRB (see our look at her film Talk Neural To Me on page 49), which was edited exclusively from video from sex webcams – not footage of the performers, but of the silent moments at the start, when no one is in front of the camera and viewers are watching only an empty room, waiting for people to appear, exchanging banalities in the chat window.

At the other end of the spectrum were films like Adam Fish’s experimental documentary Points Of Presence, which employed spectacular drone shots following the building of fibre infrastructure from Iceland to the Faroe Islands, and Shetland Islands to the UK. It conveyed a sense of a world-wide infrastructure being implanted into the landscape, as if the project were to make the whole earth a kind of colossal cyborg.

Other, harder-to-watch films included a montage of infrared combat footage from the Iraq War, which turned warfare into an eerie enterprise in swatting tiny, nameless insects, and Salvador Miranda’s film Aim Down Sights, which was built from a terrorist attack scenario in a first-person shooter video game.

Social media was a central theme throughout the conference – and in the filmmaking – with chatrooms, Instagram, and mashed-up YouTube footage featuring heavily. There were also references to the more mainstream fair that explored these subjects. Netflix’s Cam, a story about a cam girl told almost entirely through the imagery appearing on a desktop computer, was a frequent cultural reference point throughout the conference, as was the 2015 supernatural horror film Unfriended.

A number of other cultural touchstones kept recurring throughout the presentations. There were the usual jokes about Skynet, which always appear at least once in any serious consideration of the internet and AI. And at least three speakers, who had never met before, referenced the story of Narcissus as a central parable for our online world – two of them including the same Caravaggio painting in their slide decks.

As you’ll recall, in the ancient Greek myth, Narcissus is a young man so beautiful that seeing his reflection in a pond, falls in love with it. Transfixed by the sight of himself, unable to move, he eventually vanishes, becoming the narcissus flower. Echo is a young woman who loves him, but is only able to watch from afar and can only repeate the words he says, without ever being able to touch him. Eventually Echo vanishes, too, and just becomes a voice from the hills that repeats anything that is yelled at her.

Finding insights on digital technology by recalling symbolism, myth and philosophy proved very useful in trying to get perspective and meaning in what seems to be a perpetual technological onslaught. If we are to get to grips with an information tech that is earthquaking through every aspect of our lives, it’s going to require some deep thinking and deep discussion – and maybe a bit of chilling out with some ASMR. 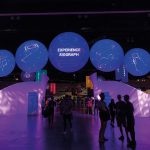 Blockchain panel: There's a new kid on the block 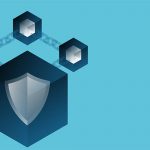