As over 50 solar-powered cars whizzed through the Australian Outback, a wide-reaching moveable LAN streamed the epic event live to the other side of the world

The Bridgestone World Solar Challenge is a biannual racing event that sees engineering teams from around the world race solar power vehicles 3000km across the Australian Outback, from Darwin to Adelaide. Started in 1987, and currently sponsored by Australian tyre company Bridgestone, the Challenge is one of the world’s top competitive trials for solar vehicles.

Last October, 53 teams from 24 countries gathered for the race’s 15th outing. Founded to encourage innovation in the field of solar powered vehicles, typical participants apply from universities, corporations and even high schools.

One contender was the Nuna X car, designed by race favourites from the Netherlands, the Vattenfall Solar Team. The team, comprising students from the Delft University of Technology, already has seven World Solar Challenge wins to its name.

The devices enabled you to create one large moveable network that spanned across vehicles, allowing files and media to hop from one car to another

But for this team, innovation doesn’t end with the cars. They also have ambitious requirements for the vehicle support convoy to enable live streaming of the five-day race on YouTube, as well as broadcasting a live daily Facebook show.

Team Vattenfall also wanted to send live updates via social media and remain in constant contact with their convoy of support vehicles, to ensure they received up-to-the minute weather data – crucial in a race where a few clouds can dramatically alter a car’s target speed.

All this required connectivity – a scarce resource in the Outback, where cellular mobile is limited to a handful of towns. The only alternative is satellite.

Vattenfall enlisted the help of Netherlands-based Stream My Event, an all-round technology-driven video production firm, to help them with their streaming and connectivity goals.

Founded by video producer Thom Verdenius and chief technology officer Floris Porro, the company had previously provided connectivity and coverage for the team in the 2017 Challenge.

The brief this time, according to Verdenius, was to “take things to the next level” . The production firm wanted to widen the range of the moveable LAN used by the team’s support convoy, so that they had constant and reliable internet access. 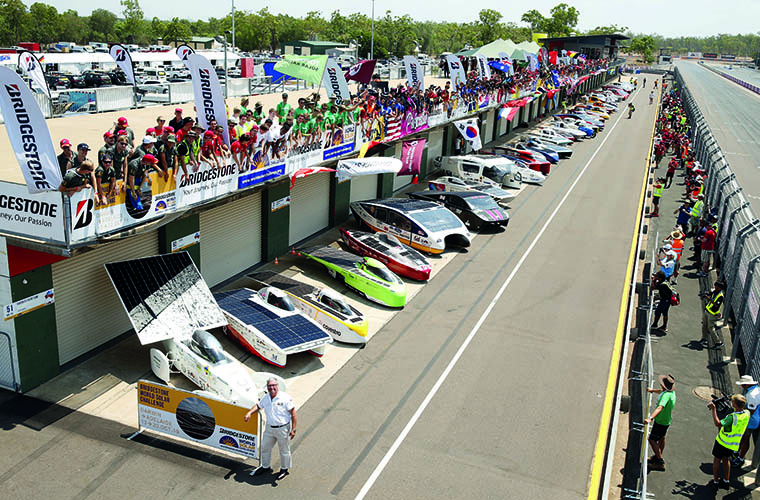 Satellite on the move

Some of the framework had already been established for the last WSC in 2017. Stream My Event had created a central satellite support vehicle, installing a lightweight and flexible satellite dish on its roof from US manufacturer Thinkom.

This kind of dish is normally used on military tasks that require satellite-connectivity-on-the-move – applications suitable for aircraft carriers, or Air Force One. The Thinkom dish was connected to Intelsat’s H3e satellite, with space on it rented through Telstra. 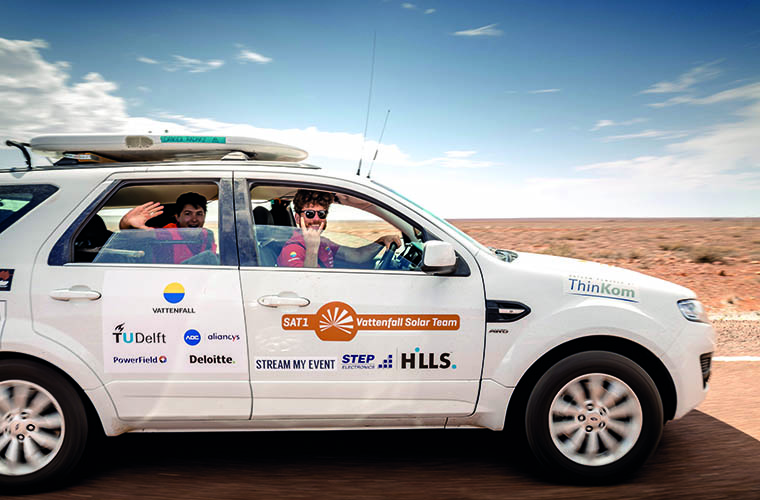 On the LAN: From a central vehicle two pipelines were established: one for delivery of assets to Europe, the other for streaming

From this central vehicle – which also contained an upload computer – two pipelines were established, one for media delivery of assets to Europe and another for streaming.

The pipeline for the European delivery began with central storage in the SAT1 vehicle, from which Stream My Event organised and monitored a centralised upload queue.

“We set up a system where the assets were uploaded onto a computer via the H3e satellite to a station in Perth, which was sent to the host [Amazon] servers in Sydney,” says Stream My Event’s Verdenius.

“It was then transmitted via a direct high speed connection to Frankfurt, and then onto the team’s media stakeholders in the Netherlands.”

While this central vehicle acted as a hub for bandwidth, there were also several other vehicles in convoy gathering content and critical data.

For the 2017 race, a LAN was established for the first time using directional antennas that covered a modest radius. This time, the Vattenfall team wanted to increase the range.

Stream My Event partner Porro came up with a solution after meeting Australian tech distributor Amber Technology at a trade show, who introduced the team to Silvus radio transmitters. Using a proprietary self-healing, self-forming mesh technology, Silvus MN-MIMO radios work in both licensed and unlicensed frequency bands, and have been used by the military for complex broadcasting situations. 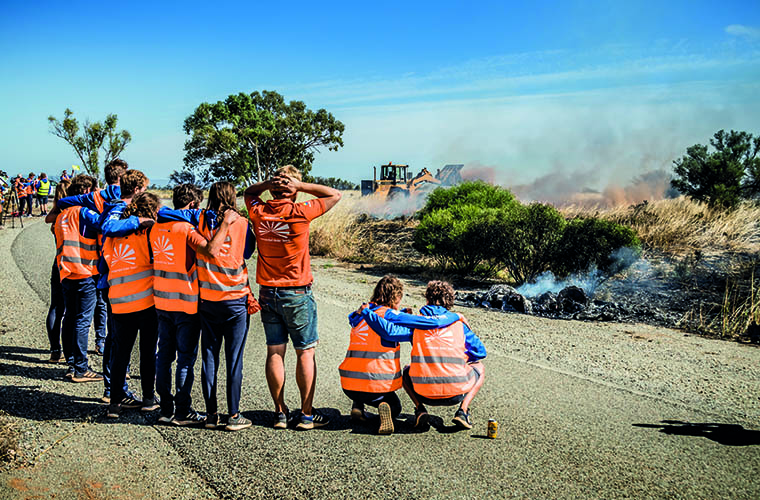 Hot stuff: A fire put an end to the team’s dream of winning, but a full recording of the event will provide valuable learning opportunities

Explains Porro: “The devices enabled you to create one large moveable network that spanned across vehicles, allowing files and media to hop from one car to another until they hit the central vehicle, where we upload them.”

Porro adds that the firm also deployed Resillio Sync – a peer-to-peer file synchronisation tool (which he describes as ‘a kind of Dropbox for LANs’) that enabled the files to do the ‘hopping’ between cars.

Crucially, these transmitters are able to create a LAN that stretches over a long range – around 10km, or six miles.

“It meant that you could be all the way at the back of a convoy – behind the solar car – and still transport files to the central satellite vehicle,” says Porro.

The central vehicle also doubled as the control room for the live stream.

The original plan had been to only stream segments of the competition. However, the LAN and technology mix proved so powerful that Porro and Verdenius decided, a couple days before the race, that it would be a missed opportunity not to step up and capture the whole event, 24/7.

All 70 hours of the race was captured by a mix of cameras, including a GoPro attached to the exterior of the satellite car and one remote controlled PTZ Optics camera, situated on the dashboard of the chase vehicle tailing the Nuna X. Silvus Obscura body cams – provided by Amber Technology – were used as well. 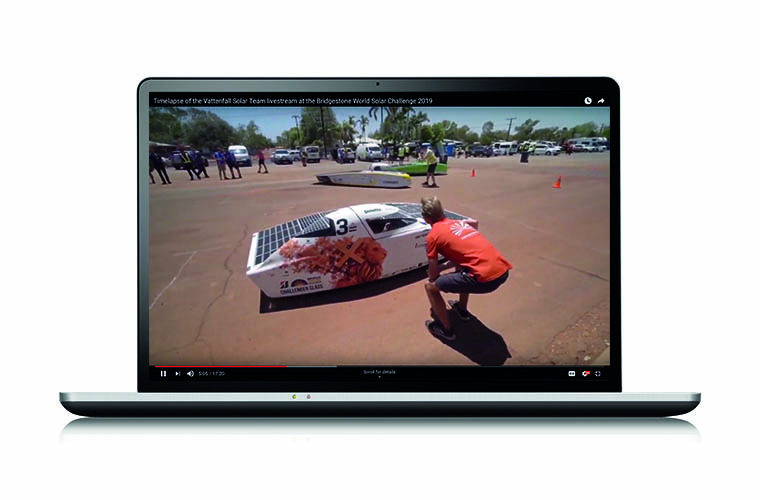 Stream My Event also installed another computer in the central car, which brought the multiple live feeds from the LAN into a software-based vision mixer, VMix. From here, using a single laptop, the team could produce a live show with graphics created via the firm’s own software (see panel, left). Verdenius adds that the pair even provided commentary on the live stream when they knew people in Europe were watching.

According to Verdenius, viewers included fans, the race organisers, parents of the participants, and stakeholders such as sponsors Vattenfall and Intelsat.

Amber Technology also supplied Stream My Event with an Aviwest bonding encoder to upload the show via IP to YouTube.

Says Porro: ”We used a Teradek Bolt point-to-point encoder, which is low-latency IP streaming. The great advantage of this is the Sony camera essentially then became an IP cam, allowing us to receive it whenever it was in range of any of the vehicles equipped with a Silvus radio.”

Perhaps the biggest challenge Stream My Event met was when the Nuna X car they’d been following for almost 3000km dramatically burst into flames near Mambray Creek, almost 250km from the Adelaide finish.

The team cut out the audio as soon as they realised there was an issue, but after discussing it with the Vattenfall Media team they made the decision to keep streaming.

Porro explains that there was no danger to team members and the rescue process lasted about ten seconds.

So while it might not have been the finish the Vattenfall team desired –Belgium’s Agoria took the title after a chaotic final day – the team does now have an unbroken video record of the 2019 race from start to finish, which the team of 2021 can now study and build from.

The pitch from down under 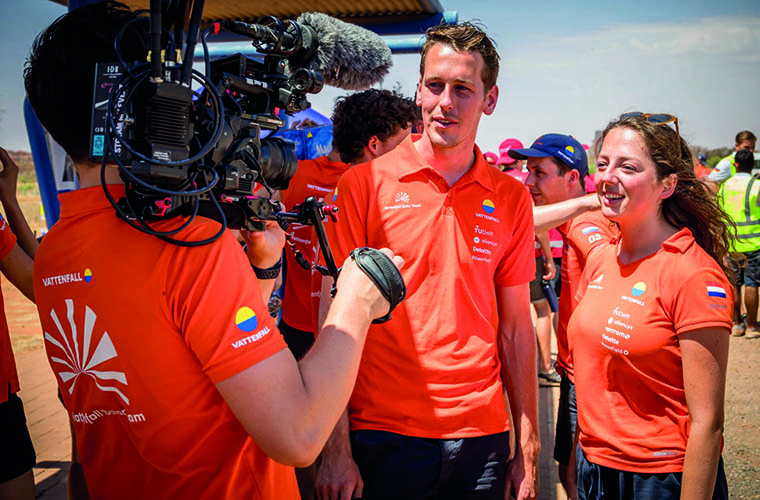 Stream My Event used its own graphics package, hologfx.io, on the World Solar Challenge, which they developed in-house as a cheaper and easier way of creating graphics for live events.

For the past few months, Verdenius and Porro have been working with start-up accelerator Startupbootcamp to bring this package to market, creating new company, Holographics.

However, one of their big investor meetings was scheduled bang in the middle of the World Solar Challenge. Using the moveable LAN they created for the race, they were able to stream their presentation live from the Australian Outback to a theatre in Amsterdam, via YouTube.

“Using the LAN, we were able to stream via YouTube’s low latency setting, which cut delay down to less than ten seconds,” Verdenius says. “We also used Whatsapp to align with the events manager on site. It was like having a journalist’s earpiece.”

The end results were broadcast on a large screen in front of 30 or 40 investors, and the set-up was perfect for enabling the pair to demonstrate what their live graphics software was capable of during a live stream.

“Based on this weird set-up, we came away with quite a few leads without having to actually be there.”