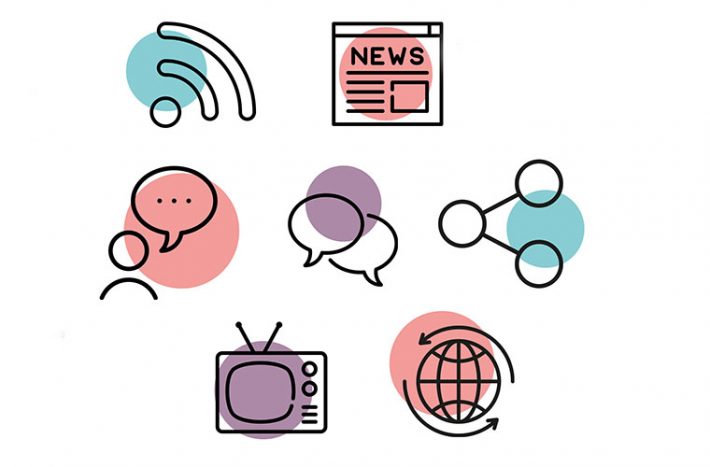 A recent EBU report said broadcast is Europe’s most trusted news source. But trust doesn’t mean what it used to

The European Broadcasting Union has issued a report that claims broadcasting is the most trusted media outlet in Europe. It’s a bit of a self-serving exercise for the broadcasting union to say, but it’s true that Europe – along with other digitally advanced regions around the world – is coming to the realisation that ubiquitous digital connection doesn’t automatically produce truth and knowledge.

The report’s top-line summation says: “There is a noticeable trust gap between broadcast and new media. While radio and TV are the most trusted media among EU citizens, the internet and social networks are trusted the least.”

But there is a deeper and more subtle point to be made: although EU citizens say they have greater mistrust of internet news sources, they are relying on online sources for their news more and more.

The EBU report – based on the EU’s Standard Eurobarometer 90 report, which surveys European public opinion on a variety of issues – opens with a now widely accepted truism about the current relationship between media and the digitally connected public: “In the age of media abundance, trust is important in the relationship between media and their audience. However, maintaining a high level of trust is more and more challenging in a world of filter bubbles, echo chambers and disinformation.”

Note that the report measures the level of trust the public has for a given media, not its level of accuracy or reliability. The Nordics and Benelux countries, and Ireland, have high levels of trust in their national news; France, Spain, Greece and Switzerland reported low trust in their national news, and the rest of the European countries polled registering a medium level of trust.

One of the most significant points made in the report was that greater trust in news correlated with greater satisfaction with a country’s democracy. The near cliched example is that the Netherlands, Denmark, Sweden and Finland all report high satisfaction with their democracy (and many other countries look at those democracies enviously) and they registered the highest trust in their news media.

Radio was the medium that European citizens reported the highest trust in across the continent, and most countries expressed a high trust of the news they heard on the radio, with that trust having grown over the past five years. However, the interesting exceptions were Greece, North Macedonia, Serbia and Turkey, who all reported ‘no trust’ in the radio news in their countries.

“in our connected world, we are continuously collecting and comparing news across platforms”

On the other hand, trust in the internet is on the wane, according to the report. The highest levels of trust in internet factually were from Albania, Hungary, Poland and Slovakia. Sweden had the lowest level of trust for the internet, with 71% of respondents saying they tend not to trust it (although in 2017-2018 it was 76%). Other countries reporting a high level of internet mistrust were France, Ireland, the UK, Spain and Germany.

According to the EBU Trust in Media report, in Turkey, 58% of those polled said they tended not to trust information on the internet. But, remarkably, that is a significant decrease from five years ago. While most other countries experienced a significant or at least a limited increase in their mistrust of internet information, Turkey’s trust in the internet increased by more than ten points.

Trust in social media networks had even worse numbers. Albania and Hungary had the highest levels of trust in social networks, with 54% and 51% respectively, saying they tended not to trust them. On the other end of the spectrum was, again, Sweden, with 82% of the population saying they didn’t trust them.

The immediate conclusion one would draw is that European residents see the internet and social media technologies as problematic for living in a fact-rich society – or at least as a place you would avoid if you expect to become well-informed. The EBU report seems to paint a clear picture of a Europe shunning the internet in favour of the TV news and radio.

But the truth is a bit more complex. As usual. While Europeans say they don’t trust the internet, most of them still use it to get a large proportion of their news. 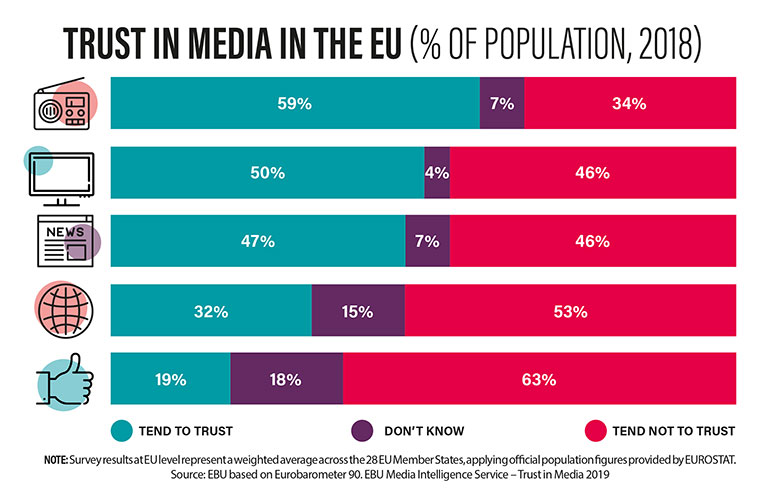 A 2018 Pew Research Centre survey of western European countries confirmed the European affection for TV. Among the eight countries surveyed, 70% of the respondents said they got their news ‘at least daily’ from TV. But – and here’s the surprise – 60% said they also got their daily news on the internet. Radio – which the EBU report declared the most trusted news outlet – actually finished third when it came down to actual usage.

The Pew report seems to confirm that in our connected world, we are continuously collecting and comparing news across platforms. We might sit at home and watch the BBC News every night, but we are also simultaneously accessing news on the internet and social media.

The Pew report also said that younger Europeans – unsurprisingly – were much more likely to get their news through social media. Of Danes aged 18-29, 75% said they get news from social media once or more daily, and 68% of Swedish 18-29 year olds said the same. What’s remarkable in these numbers is that Nordic countries – who register the highest mistrust of the internet and social media when it comes to news – are also one of the biggest consumers of news on those platforms.

These countries consistently register high levels of trust in their national and traditional media. Does having a stable democracy and a high level of trust in institutions allow people greater confidence in being able to compare multiple sources of information, even across platforms they think might be untrustworthy? Or is the Nordic enthusiasm for social media news no more than a precursor to a collapse of factuality in those countries? Are they just late bloomers in the transition to a post-truth cacophony?

It’s well understood that social platforms are designed to be as addictive as possible. We are drawn to them in a way that traditional outlets can’t compete with. In a way, it’s amazing how well traditional media outlets are still doing, given the competition. But the connectedness, instant access and potential for amplifying marginalised voices that social media can provide – the potential for good in social media – is still a major lure, particularly in the developing world.

In a recent Pew Research poll of 11 emerging economies,  a majority in every country polled said access to mobile phones, the internet and social media have made people both better informed about current events and easier to manipulate with false information and rumours. The most striking number was in Jordan, with 93% polled saying connected technology made them better informed, and 92% saying it made them more easy to manipulate. Venezuela was 87% and 63% respectively, Lebanon 83% and 79%, while Tunisia registered 83% and 80%. This is alongside a median of 68% of respondents who said they see articles on social media that seem obviously false or untrue.

The report underlined this apparent paradox: “In many instances, individuals who are most attuned to the potential benefits technology can bring to the political domain are also the ones most anxious about the possible harms.”

This might account for the extreme numbers in the Nordic cases, which are countries with a long-term, high degree of sophistication with connected technology. They know what they are getting themselves into when they step into the online information sphere and they have a trusted national media that they can fall back on if they lose their way.

Some research from Pew last year seems to confirm this. Pew tested Americans on how well they were able to tell factual statements from opinion statements in news media. Surprisingly, the study found that “those who place high levels of trust in the news media are better able than others to accurately identify news-related statements as factual or opinion”.

The report added: “Almost 4/10 Americans who have a lot of trust in the information from national news organisations (39%) correctly identified all five factual statements, compared with 18% of those who have not much or no trust.”

Two now-famous reports, The Tactics & Tropes of the Internet Research Agency, compiled for the US government by New Knowledge, and The IRA, Social Media and Political Polarization in the United States, 2012-2018 by the Computational Propaganda Research Project at the University of Oxford, have meticulously outlined how internet communication has become a battle space, and how social media especially is a tool for manipulating opinion on a massive scale.

Organisations like Oxfords’ Internet Research Institute and the US-based Data & Society also conduct ongoing analysis of the social impact of connected media. But the public, through painful experience, is only coming to grips with how complex the internet is as a news source. When we open up YouTube or Twitter, we are entering a war zone where algorithms and the organisations, institutions, business or governments that oversee them are competing for our attention and for access to how we are going to view the world. And as people come to terms with that, they are able to arm themselves better to ward off attacks – whether those come in the form of neighbourhood trolls or swarms of bots or well-funded think tanks.

Having to compare multiple sources to determine what we believe is the truth should make us like researchers, scientists, or librarians – people with a good grasp on the organisation of factuality. But it seems to have made us less and less trusting and more panicky about being lied to. We’re like paranoid lovers continuously rifling through our partner’s stuff, looking for the evidence that we’re sure is there, and if it’s not there, that’s not proof of innocence, that’s just proof that they’re good liars. It makes us an easy target for the Iagos of the world.

Having access to an infinite number of news sources may not make you better informed. It may just make you crazy. It’s not quantity that’s going to solve the global crisis of factuality, it’s quality.