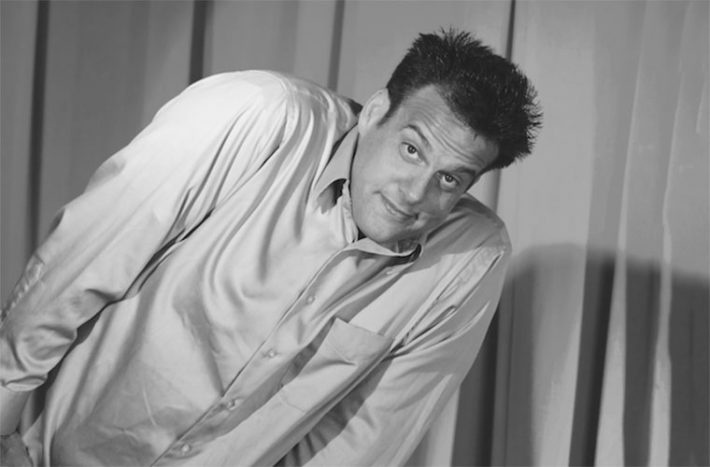 Brian Scheil’s production company started during the early days of streaming. A firm believer in LiveU streaming technology, he is now called on to stream live content in high-profile and data-challenged environments

FEED: First, can you tell us how your company Entertainment Services LA got started?

Brian Sheil: We have been in this game for a long time – since the nineties. We kind of started out producing television content for comedians and worked at a comedy club called Rascals Comedy Club in New Jersey. We filmed all the comedian sets for The Tonight Show and then what became The David Letterman Show. Our library is like a Who’s Who of comedians: Denis Leary, Rosie O’Donnell, Tim Allen, Ray Romano – everyone who’s anyone. So we’ve been in that game for a long time.

Then, when live streaming came around, we were at the forefront of that, and were livestreaming from location. We would livestream from a comedy club, doing backstage interviews live to YouTube channels or to our own page. We were in the right place at the right time for web streaming: when the popularity of YouTube really came to fruition. When Facebook Live came around, it just exploded.

FEED: What was it like in the early years of live streaming, before there was such great technology available?

Brian Sheil: We were banging our head against the wall the whole time. I remember our first couple of live streams with Tommy Davidson, who’s a comedian. It used to be a big deal for us to be able to stream out 512Kbps video – it was the size of a postage stamp. That was a big deal for us, using Windows Live Media encoder to push those live streams out.

It was always very difficult and very underwhelming. And forget about wireless internet. That was all hardwired. There was no cellular bonding technology to give you internet back then at all.

“To buy the internet out on the red carpet already blows your budget right out of the water and, even then, the reliability is still in question”

FEED: What types of live streaming projects are you focusing on most?

Brian Sheil: I’ve done the MTV Movie & TV Awards for 15 years and Live from Lincoln Center was Emmy nominated for the best live stream content. We have been lucky enough to get jobs like the Pride March in New York for Netflix. We put our TriCaster on the Netflix pride parade float for Netflix and streamed the route down 5th Avenue. A three-hour parade route, live.

We had many devices on this parade float with us, with competing technologies. We had an uplink and downlink to a remote location, with another switcher in that remote location where they monitored all the downlinks. We used LiveU cellular bonded technology for the uplink – it was the LiveU 500 at the time, with the LiveU Xtender external antenna.

The only one of our uplink devices that worked for the whole three-hour trip – with virtually zero dropout – was the LiveU pack. So we stayed with that stream the whole time.

We’ve become known for live situations with crowds of people around – all on their cell phones – and still being able to get the broadcast out, even in that congested environment.

We’ve done a lot of streams for the Stand Up To Cancer benefit, which is a multi-network, philanthropic organisation in America. The team at The Voice called us and America’s Got Talent, too, and we found ourselves producing part of the live streams that would accompany the finale TV shows. We also do a lot of work for MTV. Two years ago, MTV came out with Wonderland, which is a live music and pop culture series. We incorporated a wireless camera using LiveU that would follow around the artists. It was a vast music festival area, and they don’t make a wireless camera feed that can cover such a vast area. 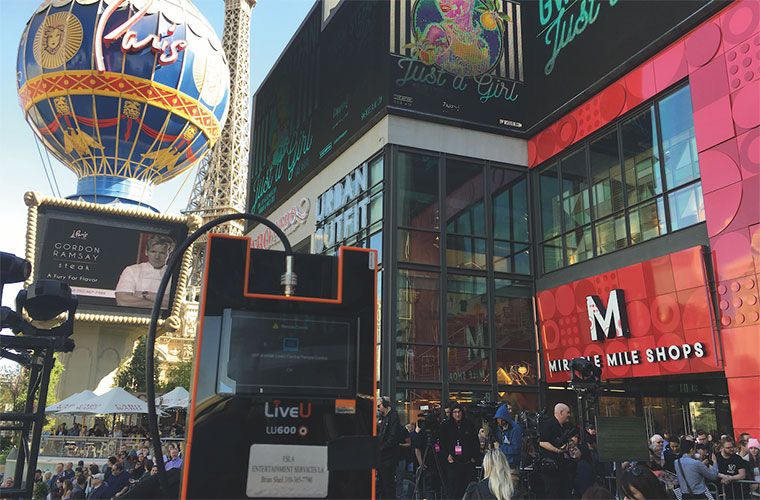 FEED: Does the company provide advice and consulting for live streaming projects, too?

Brian Sheil: Entertainment Services LA can advise projects from a technical standpoint, and we can show them what their live streaming options really are.

We advised Pluto TV on its paparazzi show, Paparazzi TV. The paparazzi are a nutty lot. They go around and follow celebrities everywhere. We decided: ‘Wouldn’t it be great to follow these celebrities around? Let’s make Paparazzi TV live.’ And we also helped Pluto in the creative and development of that show. The show was on TiVo TV for a small amount of time.

We had three paparazzi teams that searched through Hollywood and chased down the latest celebrity – the Kardashians and all that. And we’re live on TiVo TV for the whole day, following these people around with three different LiveU crews.

FEED: LiveU has been one of your key technologies. How has it been especially useful?

Brian Sheil: The LiveU has become an integral part of our deliverable service. Even to the point where it’s not a backup. We use it as our primary uplink from some of these locations.

For example, if we have to do a live stream from the front of the Kodak Theater in Hollywood, we’re not going to get internet out there.

LiveU is able to provide reliable internet anywhere from location. We did the Golden Globes this year and the SAG Awards. We’re doing all these red carpet events, and along the whole press line, every single camera crew has a LiveU unit.

To buy the internet out on the red carpet already blows your budget right out of the water, and even then, the reliability is still in question. So people are like: ‘We might as well buy our own LiveU unit and start doing things that way.’

I have two LiveUs that we supply as part of our package. I can’t tell you how many times I’ll be on a show and there’s an internet problem; I take the LiveU feed, and that’s it: we stick with that for the rest of the show. We use the LU600, and I love the LiveU Solo – the small unit. It has such an easy interface to YouTube and Facebook that anyone can use it. And you don’t need a large back-end infrastructure to make these things happen.

We did a live stream with Gwen Stefani for the press conference for her big show in Las Vegas in front of the Planet Hollywood Hotel. And they would not set up internet out in front of the hotel. They couldn’t do it. So our portion of the show was cancelled. And I said, ‘Wait a second. Before you throw in the towel, let’s see how the LiveU functions and operates in front of your hotel. Let’s see if we can’t get a stream out.’ And it was bulletproof. 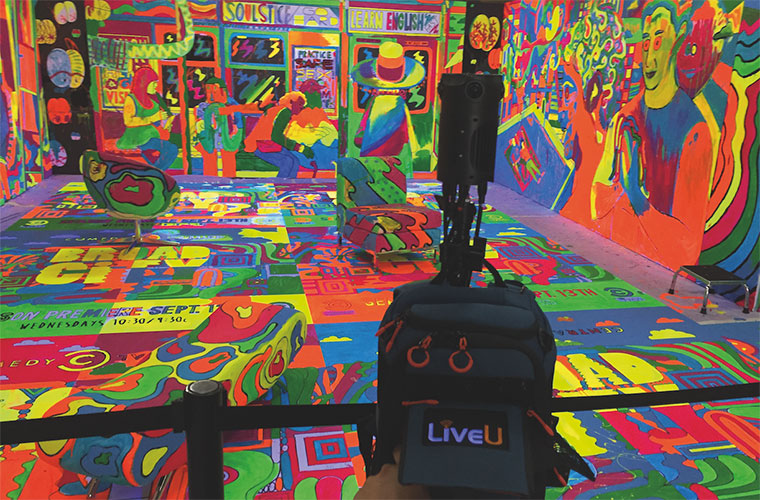 FEED: What have your experiences been like streaming in 360?

Brian Sheil: We’ve done a few things, like the 360 we did for San Diego Comic-Con, and also Lollapalooza and the Coachella music festival.

All of the models from the LU600 and beyond have what they call the ‘data bridge’ mode. That takes the LiveU bonded cellular technology – and you’re not doing video encoding, you’re just using actual internet, right from the box. And that’s what we needed to do the 360 live at events. You don’t have the wireless encoding technology to do 360 yet, so you have to have true internet. And that’s what the data bridge mode enabled us to do.

We just did the BeachLife music festival in Redondo Beach, near where I live. Willie Nelson played, Jason Mraz played and Brian Wilson played. There were a lot of people there and there’s not a lot of internet. But we were able to do 360 with the data bridge mode on the LU600. 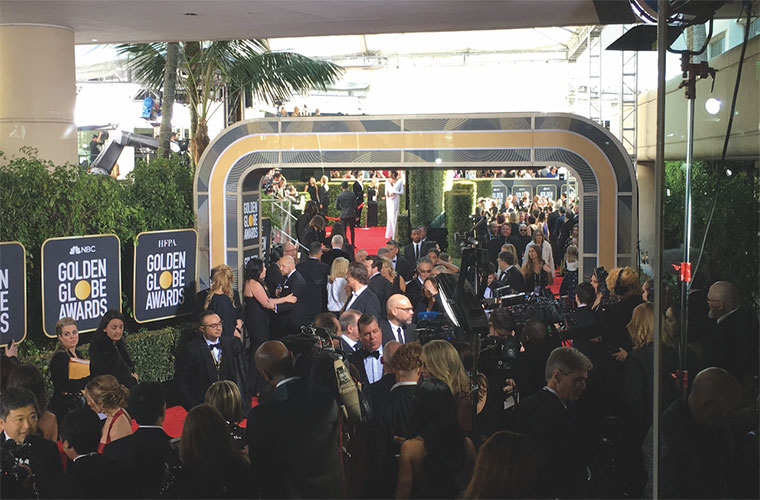 FEED: How do you see these new live streaming technologies developing and changing content in the future?

Brian Sheil: I think the technology has solved all the big problems we used to have. You don’t even need a switcher anymore. You can have multiple cameras in the field streaming to Australia and they all come in. They’re in sync at the other end. We worked with the Australian Home Shopping Network, and were able to do a live feed to them with multiple cameras that remain in frame sync using different LiveU units.

Looking at the future, I don’t know what’s going to happen with 5G. I’ve been told that it’s even going to be better and that you’re going to be able to do multiple streams from live, but I’ve not worked with 5G units yet, so I don’t know. But a lot of opportunities have come along from knowing this technology.