Before being acquired by Frankly, WorldNow had been in the digital solutions business for broadcasters since 1999. The company provided a digital publishing platform, which included CMS and multimedia functions with a front end that delivered to a variety of platforms including iOS, Android, Apple TV, Fire TV, Roku and the Web. It was primarily used by TV and radio broadcasters, as well as some newspapers.

In response to demand from broadcast customers, Frankly developed a fully-integrated video workflow system. The company shipped its own hardware appliances built to receive and record an SDI broadcast, allowing the customer to do live-to-VOD editing using a DVR function on the appliance, as well as live streaming.

“That architecture was the correct one for a long while,” says Omar Karim, COO at Frankly. “At that time it was hard to push high-quality video to the cloud and then work with it remotely. But over the last few years we have pivoted that whole architecture into the cloud.”

What was once potentially risky has become an obvious choice for many broadcasters. Bandwidth is stable and more affordable, so companies can leverage a fast connection in and out of the cloud very reliably. Karim points to other practical reasons for using cloud architectures.

“The cloud also allows us to diversify video sources,” says Karim, “so now we’re not just working with a primary broadcast signal but we also bringing in secondary signals from the station or feeds from the field. The goal has been to take all of our customers’ investment in IP video workflow and help move that up into the cloud so they no longer need to be connected to a local appliance. It can all be done through our web-based CMS.”

Building the new service on top of AWS Elemental’s platform allows Frankly to easily migrate their customers to the cloud to help them better monetise their content and services.

For the last year, Frankly has focused on building a codebase on the AWS Cloud and is currently testing it with customers. The new workflow allows certified appliances to transmit into the cloud and then control the content through the Frankly Producer web-based CMS.

Once the video signal is captured in the cloud, it is fed through AWS Elemental MediaLive for video processing. It is then made available on the AWS Elemental Delta video delivery platform where it is optimized for monetization, management and distribution across internal and external IP networks.

AWS Elemental Delta, which offers frame-accurate editing, records a buffer that customers immediately access through the CMS. Using Frankly Producer, customers manage, store and archive the content in Amazon S3 or use AWS Elemental MediaConvert to create video-on-demand content for broadcast and multi-screen delivery at scale.

“Customers very simply choose a particular show that they want to edit, pull out clips or other assets, and publish those on their websites or apps,” explains Karim.

“In the background, we are using AWS Elemental Delta features to export an HLS package or MP4 outputs, storing those on Amazon S3 or serving them on Amazon CloudFront or other CDNs. All of that is completely invisible from a customer perspective. It’s orchestrated by an API layer we wrote on the Amazon Elastic Container Service for Kubernetes (Amazon EKS). We’re using multiple elements of the AWS ecosystem to connect all of these parts together.” 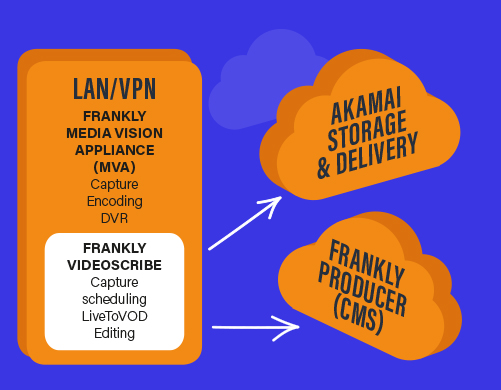 Karim recognizes that for many parts of the world “mobile first” is the preference, and Frankly works to accommodate that. Right now the company is looking at standards-based encoders such as LiveU and other cellular bonding vendors that can push content to the cloud. No matter where the source is, or what device it is captured on, each new content stream appears as a unique channel in the Frankly CMS.

“The great thing about the cloud is that it’s completely elastic. Depending on what the customer has signed up for, they can have multiple channels of video coming in at the same time. We have a dashboard that displays all of the channels, and we’re recording them all in the cloud. Through the web-based CMS, they can clip out and highlight what they want and publish it to all of their endpoints.”

“Our goal is to create a channel management system in the cloud. When customers are working with their current broadcast channel, the idea of restreaming it is just the first step. But the next step
for this architecture is to allow them to control all aspects of channel programming in the cloud.”