Cloud microservices promise to change how we do broadcasting. How far along the journey are we?

Media logistics processes that were once done by purpose-built physical hardware in television production facilities can now be carried out by software – and often software operating in the cloud.

This is a consequence of the evolution of commercial off-the-shelf (COTS) hardware replacing bespoke hardware for broadcast applications. As soon as the industry embraces the use of COTS hardware, it becomes possible to use an IT toolset that enables automation, replication and, ultimately, everything ‘as a code’. Virtualised systems existing as software in data centres means all the processes a broadcaster needs can now operate in a realm of pure code.

“Microservices enable broadcasters to find new ways to adopt, engineer, operate and maintain the value of their solutions,” says Arnaud Caron, director of portfolio transformation for broadcast at MediaKind.

“They can enhance media processing functions such as encoding, packaging, pre-processing and transcoding. This allows new levels of scale and resiliency while enabling new business models to be realised. The obvious benefits for broadcasters are reduced costs of delivery and decreased time to market.”

The main question facing broadcasters then will not be whether cloud is a good solution, but which cloud solution is the best

Put another way, microservices are basically the back end of all cloud services, which a few years ago only Amazon and Google could really benefit from. By using microservices to create modularity in application development, something that wasn’t available under the monolithic approach of the past, broadcasters can work with the software development community to push forward a more collaborative and flexible environment.

“Broadcasters can now get to innovation software speeds that were previously defined by delays in hardware deployments,” asserts Joop Janssen, the CEO of Aperi. “Microservices are the next logical step for broadcasters.”

Five years ago, the vast majority of media processing workflows (such as production, playout and encoding) deployed by broadcasters relied on hardware appliances. Each was a siloed workflow with its own management, control and operations team.

“Today, most of those workflows are software based, with a similar and sometimes even better performance,” says Eric Gallier, vice-president of video customer solutions at Harmonic . “They can share a common orchestration system for resources and workflows, making deployment and operations simpler. We see broadcasters adopting more and more cloud-native, microservice-based software to deploy in the public cloud or private data centres for workflows such as pop-up channels, live sport events, channel origination and disaster recovery.”

Microservices are actually one of the three components, including containers and orchestration, that make up cloud-native technology. Gallier explains: “With microservices, the media processing workflow is broken down into relevant features – for example, baseband over SMPTE 2110 I/O support, channel encoding, channel playout and channel branding. They are all independent, using their own resources, like CPU and memory, but are communicating together efficiently. Orchestrating optimised media processing workflows becomes easier to achieve, scale and maintain when the software solution relies on microservices compared with a monolithic software one.”

According to Shawn Carnahan, CTO at Telestream, the development priority is in orchestration and workflow.  “When you break down the challenge into smaller tech units, they become replaceable, upgradeable and scaleable, but you still need something that will orchestrate all these microservices in order to create a supply chain and business model.”

Microservices are an awesome candidate for more personalised playout applications

One of Telestream’s larger customers uses the company’s Vantage product for processing 60 million minutes of content.

“Managing all this on-premises infrastructure is a huge deal, since they are continually maxed out,” says Carnahan. “They are always two major versions behind, because they just can’t afford the downtime that a major software upgrade requires. Periodically, they need to scale up and that is capital intensive.”

But this particular organisation is transitioning to a new business model where it can perform the same activities, using the same software, now re-architected as microservices.

“Now, if they need to process 120 million minutes, we can turn that on tomorrow,” says Carnahan. “And when we do a new software release, they are not even aware of it. We can deploy those changes very incrementally and make sure that nothing breaks in the outcome.”

The transition is far from complete. Although IP adoption has accelerated, industry-specific interfaces and protocols such as Serial Digital Interface (SDI) are still a dominant transport technology for production and facilities, particularly for uncompressed video.

“Dependence on SDI impedes the ability to scale and grow operations efficiently and leads to separate broadcast and IT infrastructures that further inhibits flexibility,” says MediaKind’s Arnaud Caron.

For Gallier, the biggest barrier is timing. “When broadcasters refresh their facilities, they tend to question themselves about whether it is the right time for them to move to cloud-native, microservice-based technologies,” he suggests. “They worry about whether it will work well or offers more freedom and flexibility than alternatives.”

This mindset battle is flagged by others. “Responsibility is shifting from the customer buying, operating and maintaining the equipment to a business model where companies like Telestream are installing and maintaining the technology,” explains Carnahan, who questions whether organisations are willing to make the change.

“Microservices allow a service provider to implement and improve outcomes more rapidly,” he says. “However, if a customer needs to consume those microservices directly, possibly for cost reasons, they must be much more technically capable.”

Caron agrees, urging the need to build the right skillset within the organisation, potentially shifting from engineering towards managed services; replacing work siloes with shared practices.

“As legacy hardware reaches end of life, and as on-premises data centres run out of capacity; the logical upgrade path will be a move towards an all-IP infrastructure, software-defined media processing, virtualisation and cloud-native solutions,” Caron says. “As the cost of public cloud solutions and related connectivity align with the cost of data centre ownership, operators will use infrastructure transparently and independently from their physical location.”

These questions and concerns will be swept away, just as the migration from ASI to IP, tape to file and SD to HD were accepted. 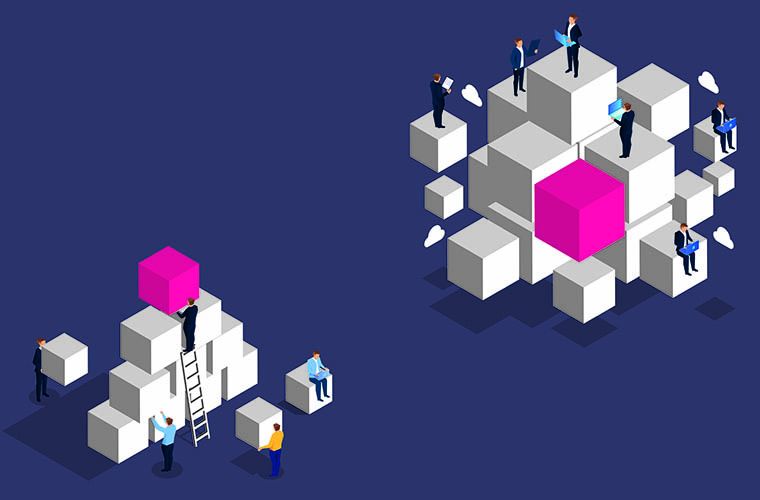 “In five years’ time, cloud-native, microservice-based solutions with orchestration will be mainstream in the broadcast industry,” predicts Gallier. “The main question facing broadcasters then will not be whether cloud is a good solution, but which cloud solution is the best to manage a service that requires delivering personalised content based on analytics and other data to mass audiences. Only an extremely agile solution will be up to the challenge.”

Janssen paints a scenario where, with higher and higher bandwidths required, broadcasters will be able to process the signals partly in the cloud with FPGA servers, “but also combine that with a hybrid environment. For example, in a stadium, where you need to aggregate and ingress all the video signals and mix it with the central production”.

“Microservices are meant to be stateless and ephemeral, since you’re designing something that is intended to be killed at some point in the future,” says Carnahan.

This concept is in direct opposition to something like linear playout, which is 24/7 mission-critical – it’s not a good candidate for microservice application, according to Carnahan. However, as the market moves towards personalised consumption, there is nothing stopping broadcasters creating playout services for very small, specific, perhaps community-based audiences.

“Instead of having ten million viewers, they target ten thousand viewers,” he says. “In this scenario, if you’re off-air for 30 seconds, it’s not a big deal. Microservices are an awesome candidate for more personalised playout applications.”

The main benefit of microservices is scaleability and high availability. Consequently, we will see an evolution of broadcasters able to work from anywhere, with the latest and greatest functionalities.

“The scaleability will enable them to have the resources available when they need them and also only pay for them when they use them,” says Dieter Backx, product marketing manager at EVS. “We could almost say it could become an on-demand solution.”