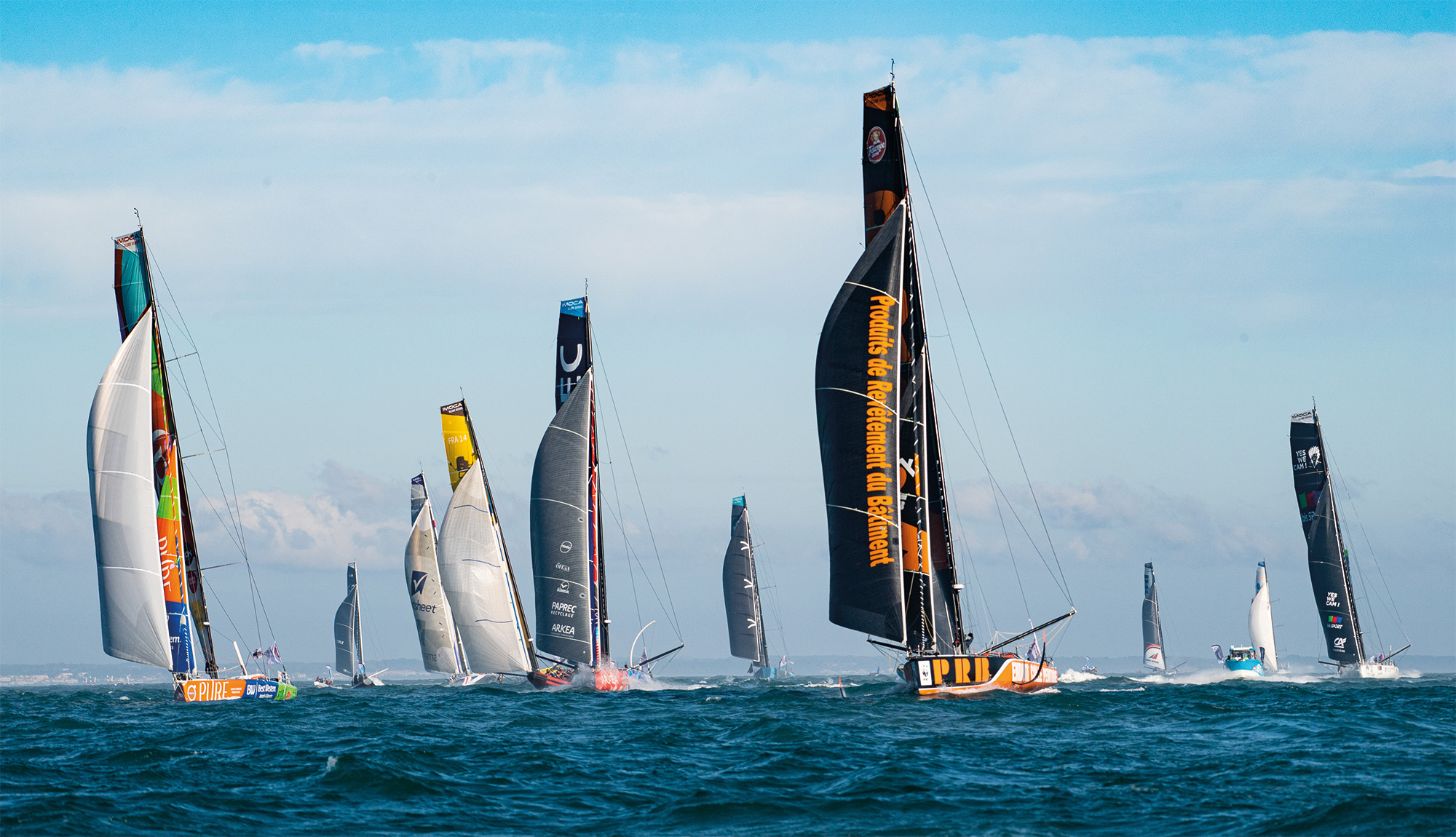 The Vendée Globe around the world solo race is the Mount Everest of sailing competitions. It also makes for amazing sports drama in a world starved for epic sports events

The Vendée Globe is one of the world’s greatest endurance events. Launched every four years from Les Sables-d’Olonne in the French Département of Vendée, it’s a solo, non-stop, around the world race that attracts sailing legends and major brands.

The competition began on 8 November 2020 and continues into 2021. The winner of the last Vendée Globe, which started in 2016, circled the Earth in a record-breaking 74 days, but the voyage can last three months. Many boats don’t even complete the race. Of the 29 skippers who began the 2016 race, only 18 finished – and that was a record. Previously, the majority of the field has had to retire. This edition’s fleet consists of 33 skippers representing nine nationalities. Six of the competitors are women, more than in any previous Vendée Globe. 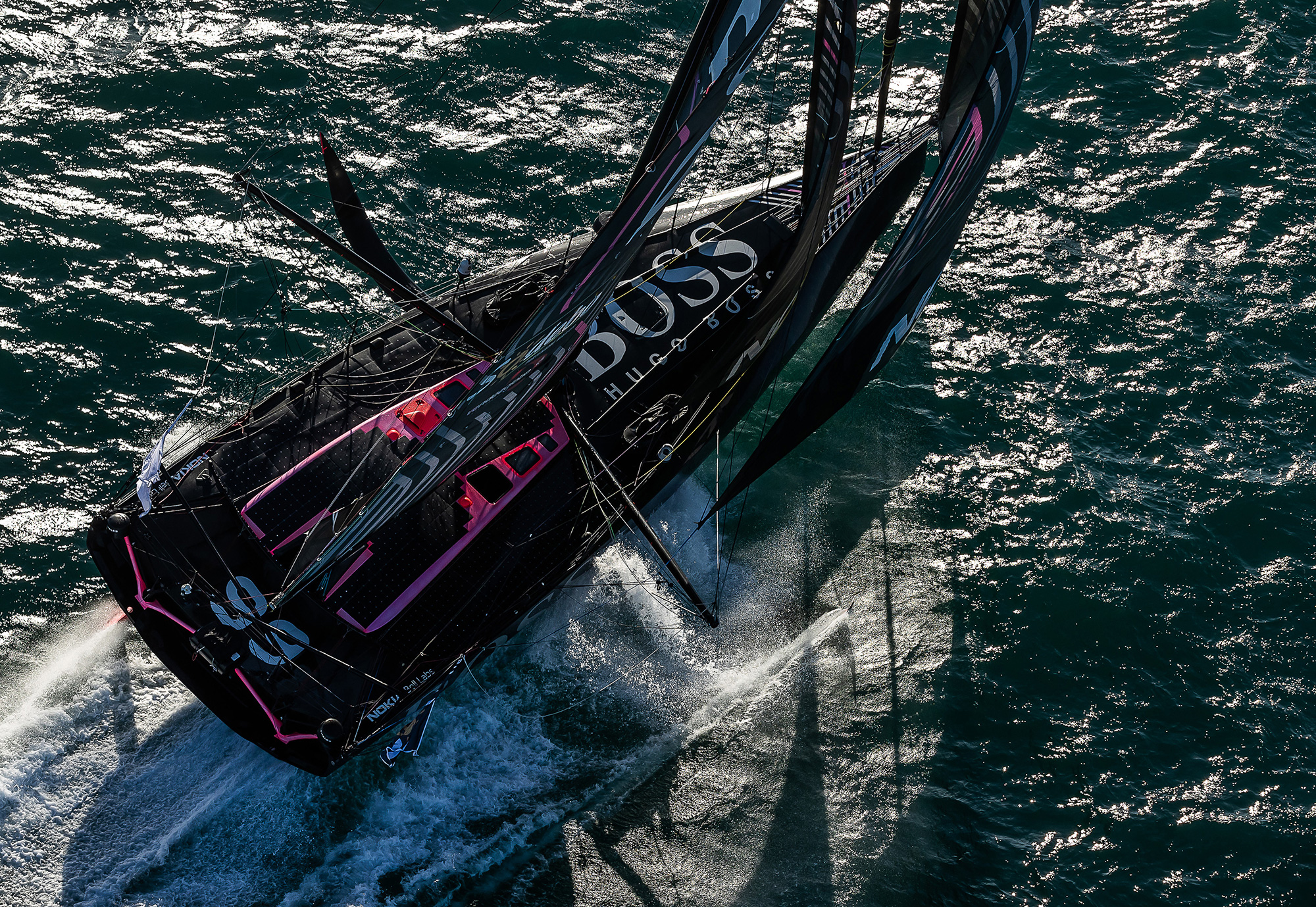 Solo, around the world sailing is a notoriously dangerous feat. The Vendée Globe has seen two deaths in its history. In 1992, British skipper Nigel Burgess was lost at sea three days into the race and, during the 1996 Vendée Globe, the Argos beacon on Canadian Gerry Roufs’ boat stopped transmitting in the South Pacific. The boat washed up on the coast of Chile months later.

Structural damage to the high performance monohull boats is common. The sea and the long days are hell on rudders, keels, masts and hulls. Then there are the collisions with UFOs (unidentified floating objects). Sometimes, these are whales, as in one case last time out (identified later with camera footage), but UFOs can often be manmade items, like floating cargo containers.

At the time of writing, high-profile competitors, Alex Thomson and Kevin Escoffier, have had to drop out due to damage. Escoffier ’s boat snapped in half in rough seas, sinking in minutes. Nearby competitors diverted from their course to rescue him. He was picked up by veteran skipper Jean Le Cam within 12 hours.

This year, many boats are trialling a new collision avoidance system technology, OSCAR. The system uses mast-mounted daylight and thermal cameras, combined with AI, to alert skippers of potential obstacles along their heading. Skippers can view and record the images captured by the mast cameras and survey potential threats on a map.

Hervé Borde has been a fixture of the Vendée Globe’s media coverage for 30 years. His company Nefertiti Production is the official host broadcaster for the 2020-21 event.

“I know this race,” Borde says. He was executive producer in 2004, 2012, 2016 and, before that, he helped individual skippers with their coverage, starting with the second Vendée Globe in 1992.

The Vendée Globe’s departure is a major celebration. Usually, Les Sables-d’Olonne is overrun with fans and the Vendée Globe village is a hub of excitement. This time, Covid-19 has forced the village to close a week before the race. Only authorised individuals were able to wave off the skippers in person. Other fans sent personal messages to the fleet that appeared on giant screens. Nevertheless, it was still a visual spectacular and included a dramatic flight over the boats by the Patrouille de France aerobatic team, streaming the Tricolour through the sky.

Shooting the complicated race start was split into two live segments: one with the boats leaving the pontoons and one with the boats heading out to sea. Using ten cameras and one helicopter with a Cineflex, Borde’s team captured the event in 4K UHD and produced a worldwide feed in HD. Directed by Anthony Forestier, director of the Tourde France coverage, the start went out to French TV channels and 28 international TV channels and digital platforms to a total of 190 territories.

Borde says the production of the start hasn’t changed too much over the years the Vendée Globe has taken place. The technology, number of cameras and number of affiliates have all grown, but the shoot has more or less remained the same. But the possibilities in terms of covering the race itself, from the individual boats, has changed greatly over the years. 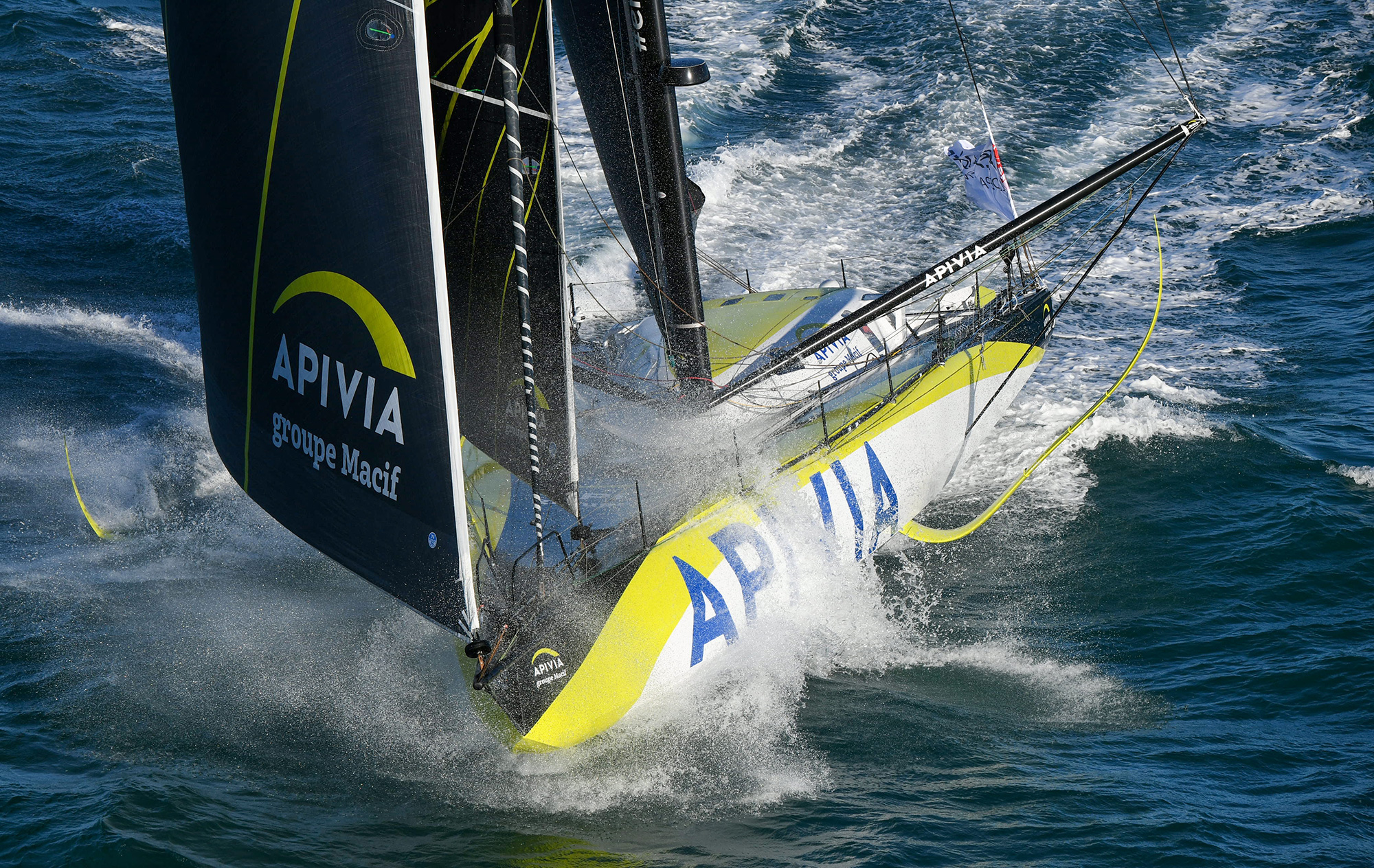 A unique challenge: Sailing solo is hard enough, but the skippers also have live video interview solutions to keep in constant contact with the outside world

Broadcasters can download the Ektacom Nomade Access solution for free, which permits them live access to book slots with the skippers for live interviews at sea for the duration of the race. The cost for the installation is absorbed by the teams who pay an additional fee for the Ektacom tool. All boats are required to install some kind of high-performance live video interview solution and also are required to have a Skype-like solution as a back-up.

Every day, the Vendée Globe produces a live lunchtime show, Vendée Live, hosted by international sailing journalist Andi Robertson. It features live interviews with skippers as well as up-to-the-minute weather reports and discussions with sailing experts and members of each boat’s support crew. The live content is transported by Inmarsat satellite technology and files are exchanged using the Iridium Certus platform.

Another new feature of this edition’s coverage is a multimedia server, giving broadcasters and press access to a full range of content. Previous Vendée Globes provided broadcasters content through separate interfaces. The new server, built entirely in house, offers full access to all video, still images, graphics, documents and audio, with direct links to content and downloadability in multiple resolutions and formats.

“Our new video server has completely changed the way people are covering the Vendée Globe,” says Borde. “And the quality of footage we’re getting has improved massively since the last edition of the race.”

When skippers transmit video or stills from the boat – everything from updates on repairs, to fan greetings to selfies and pics of their dinner – they are uploaded directly to the server. The race organisation runs a quality control check of the content and each skipper ’s onshore media manager has a 30-minute buffer to cancel the upload before it is made public. The same system can send footage back to the onshore crew privately, whether for technical use or other content that the team may be producing separately. When new public material appears on the server, fans can receive SMS or email notifications. 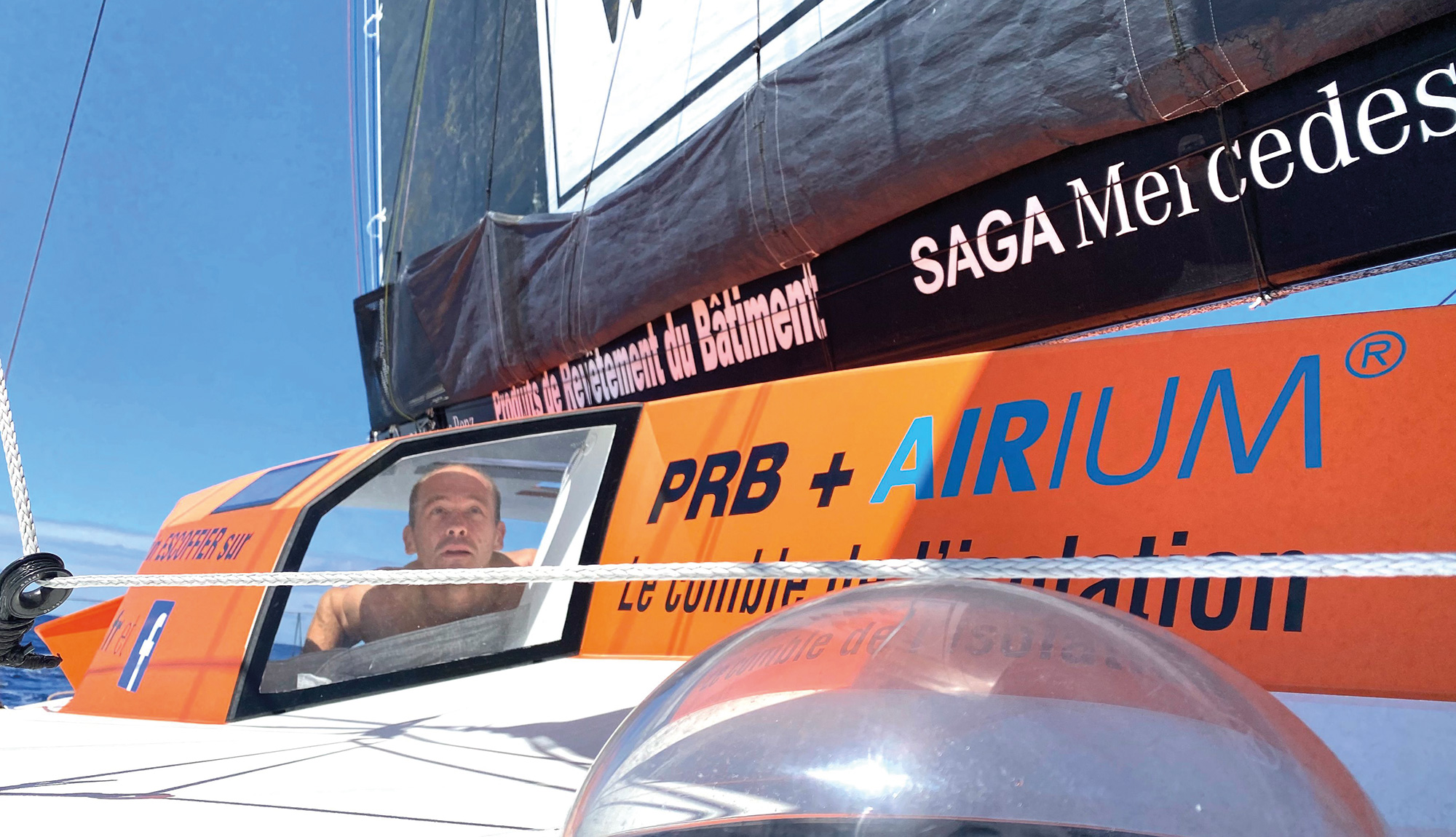 Risk and rescue: Kevin Escoffier’s boat, PRB, sank off the coast of South Africa. After 12 hours in a life raft, he was finally rescued by Vendée Globe veteran Jean Le Cam

The Vendée Globe team adds branding to the videos and also produces content from the material, including 30-second daily clips from the skippers, two-minute daily highlight clips in English and French and 15-second clips for social media.

It appears that the Vendée Globe is well-suited to a world in lockdown.

First, the participants are all completely isolated from human contact – and each had to do eight days of quarantine before start day. They also carry their own TV studio with them – not necessarily the most sophisticated set-ups, but they are able to broadcast what is happening at any time, in any location. No many sports permit so much continual personal access to the competitor.

For fans, the Vendée Globe offers a full spectrum of ways to get involved. And the length of the race itself is as long as some sports seasons – it’s like an epic novel of sport.

Stats are a key element in the Vendée Globe fan experience. Meteorology is an essential component in every aspect of the race. Wind speed and direction, currents, temperature, humidity, barometric pressure and precipitation all have a profound effect on the outcome and how each skipper copes – or doesn’t. It determines how likely they are to finish, if at all.

The race website updates the standings six times a day. The rankings list updates with each participant’s speed, location and heading, distance to finish and whether or not the boat has deployed foils. Skippers are also ranked in different categories, such as Best Speed, Best Distance Covered, Longest Distance Travelled (not necessarily the leader). The rankings are fully archived. As such, fans can travel back in time to rankings from previous days. All stats are fully downloadable in an Excel doc. 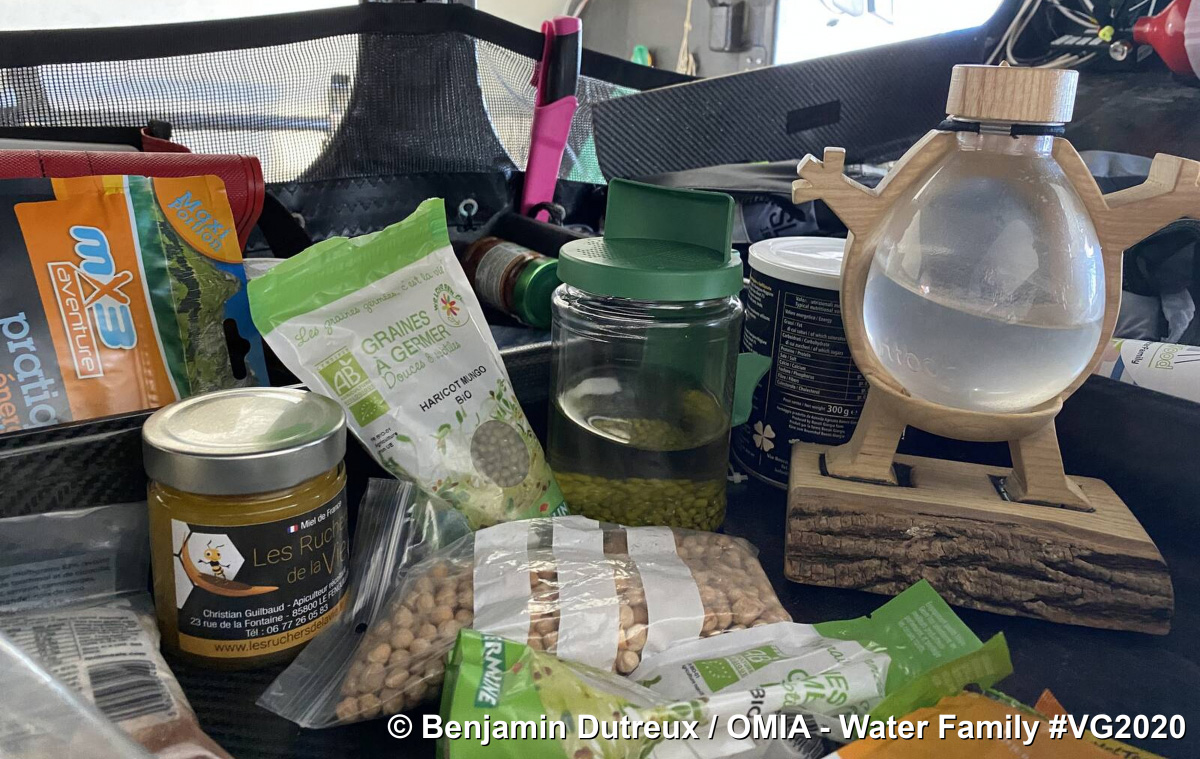 Sail away and along: Despite isolation at sea, data collected from the athletes and their boats makes the race one of the most intimate in sport

GPS allows the location of every ship to be tracked from home. The website’s zoomable tracking map to see real-time, animated weather data alongside the fleet’s progress. Fans can also toggle on and off a variety of other data points on the map, including boat names, the last edition’s winning route, day/night demarcation and even the comparative positions of the concurrently running Virtual Regatta e-sailing race.

While many of us are still compelled to stay indoors, the Vendée Globe team is taking fans along on a voyage to the extremes of the Earth and the extremes of endurance sports. 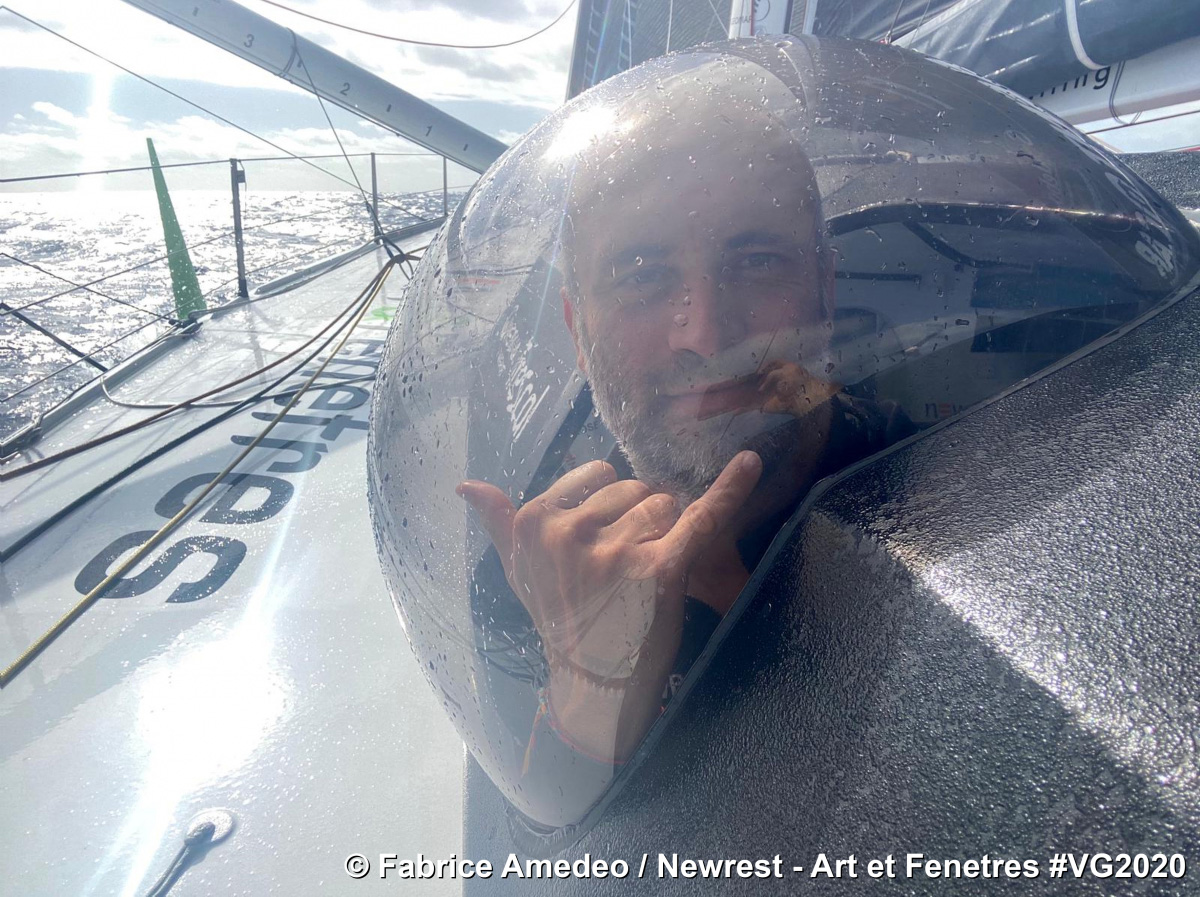 Stowing away with Alex Thomson

One of the favourites to win the 2020/21 Vendée Globe was British sailor Alex Thomson. He was a high-placing finisher in the last edition and his boat Hugo Boss is an icon of top racing technology. Unfortunately, Thomson was forced out of the race after suffering rudder damage, to the dismay of sailing fans and his competitors too, who had almost as much admiration for his boat as they did for its skipper.

The design of the Hugo Boss boat was unlike any of the others in the competition. Thomson raced the boat entirely from inside a closed cockpit, using a panorama of screens linked to exterior cameras.

The team and their partners at Nokia Bell Labs created their own AI autopilot, an exclusive sail development programme and also an advanced data experience for fans. The website alexthomsonracing.com allowed fans to check the status of the race with the same tools available on the Vendée Globe website, but additionally they were treated to a deluge of real-time data sent directly from the Hugo Boss – and from Thomson himself.

Fans were able to monitor the Hugo Boss’ key data points. In addition to comprehensive weather data, the website also displayed boat speed, maximum bow height and heel angle (the variation of the boat from a vertical position, caused by wind or waves) and the G-forces the Hugo Boss – and Thomson – were experiencing. Other monitored environmental conditions were the ambient decibel level (the ocean pounding against the thin hull of a carbon-fibre boat is loud – sailing the Vendée Globe is like listening to a lawnmower constantly for three months) and the amount of energy collected by the boat’s solar panels.

Thomson himself was also transmitting data. Fans could monitor the skipper ’s vital signs, including heart rate, calories burned, time slept and physiological work. Athlete data is becoming more and more a part of a sport fan’s experience, but no one has taken us on a journey like Alex Thomson and Hugo Boss. 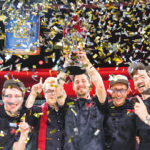 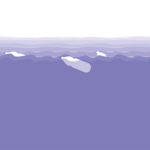 Pontus Eklöf, COO of LiveArena, was quick to realise the potential of the Internet...

From small fish to mega-sport

Small sports organisations and leagues can use new digital tools to reach audiences that...

Guardians of the Galaxy Vol. 2, 8K. What’s more, these costs cannot easily be...

The broadcast of the Olympics is itself an Olympian feat – and one that...
Read the magazine