Whether it’s tornadoes or floods, extreme weather is being tracked in real time by journalists using bonded cellular technology

When there’s an extreme weather event, people want access to information instantly – preferably accompanied by vivid, on-the-spot footage. Small teams, even lone journalists, are being deployed to the scene of big weather events to send back live or near-live coverage of potentially life-or-death events.

The vast spaces of Australia mean that big teams with satellite trucks need to be deployed sparingly and strategically. What is working well – and it’s an international trend in news collecting – is being able to deploy journalists locally in the areas that need covering.

Blended cellular technologies are becoming a mainstream solution for transmitting live from anywhere to anywhere, and are being employed by news and weather organisations in reporting on ever more frequent extreme weather events. Cellular bonding, more frequently called blended connectivity, allows a feed to be carried across multiple data links, including mobile or Wi-Fi, enabling the transmission of more data, faster and with fewer drop outs.

Australia lends itself particularly well to the use of these blended cellular units. The Australian network auctioned off the spectrum in the 700-800 Mhz band and put phone services in that. As a result, a lot of the rural areas now have cellular service that a remote broadcaster can use for sending a feed.

Andrew Forster has been a cameraman and editor, working with all the major Australian broadcasters, and now specialises in live links and satellite technology. He is a supplier of these technologies out of his base in Brisbane to Australian channels Seven, Nine and Ten for news reporting and on live location reporting. He has worked with several different cellular bonded solutions, including those by TVU, LiveU and now Dejero (in New Zealand, LiveU tends to be the most popular solution; in Australia it’s Dejero). Forster also runs his own outside broadcast company, Next Up Digital, and regularly does live weather, most recently from Fort Douglas, Palm Cove and Cairns for Channel 7’s Sunrise programme. 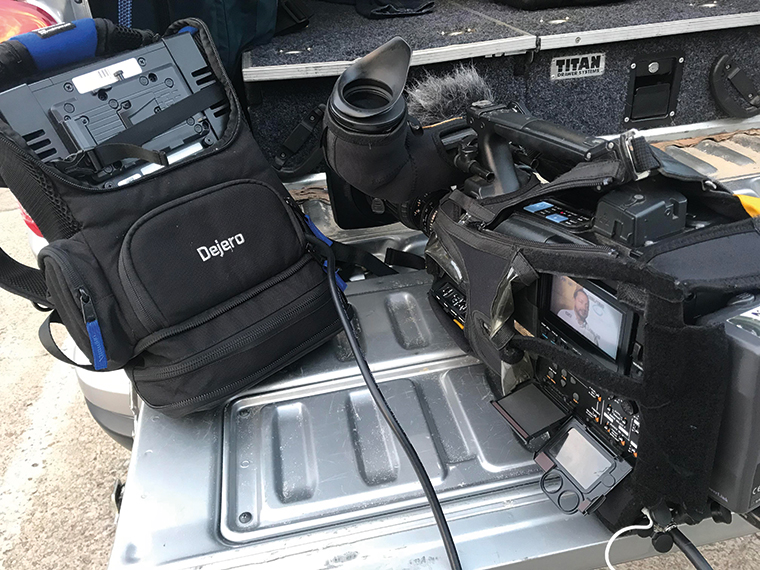 TIME IS OF THE ESSENCE Where a satellite truck takes time to set up, a journalist equipped with a cellular bonded pack can stay on the move

Flash floods
But live weather reporting is increasingly more than just cheerful exchanges with the in-house meteorologist, umbrella in one hand and a mic in the other. More often it’s about getting up-to-the-minute information out from major disasters.

Forster supplied his bonded cellular gear to Channel 7’s Sunrise TV show for its live news coverage of the Townsville flood, which inundated the Queensland city earlier this year and killed four people.

“I also sent a 1.2 metre satellite dish up to the flood for 7News Brisbane,” he explains. “Our Dejero transmitter did live crosses during the Sunrise programme, but we also used it for doing newsgathering throughout the day to send content back to Seven in Sydney, for them to cut together a story.”

The portability of blended data technology allows a lone reporter or small team to be flexible and fast.

“They often wouldn’t know where their location would be for the night. With the Dejero, they could switch it on and connect straight into the master control in Sydney from anywhere and then have that split out into other networks. It became useful to get out quick news feeds.” 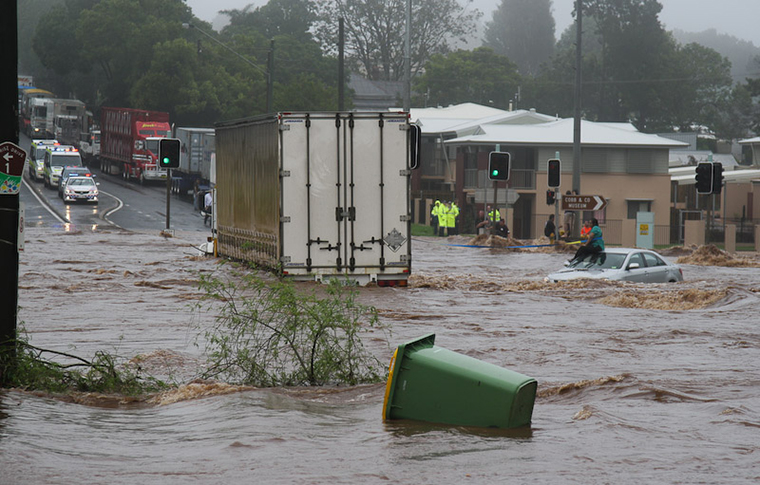 Forster notes that the satellite truck reporting on the floods was required to move quickly when flash flooding threatened. The truck may require 30 minutes to break down and another 30 minutes to set up again somewhere else, but a single journalist with a bonded cellular pack can relocate to a new location in as long as it takes to walk, run or drive there, broadcasting along the way.

Satellite technology also requires a clear line of sight to the sky to send and receive a signal, whereas cellular blended technology allows you to be inside a building or a car, which allows for more options in location, as well as greater safety. That’s not to say that blended cellular is always the way to go – if you’re hundreds of miles into the Outback, the only connection you’re likely to get is via satellite.

Forster has contributed to the coverage of several of Australia’s big tropical storms, including Cyclone Debbie in 2017.

“Sometimes coverage of these events gets on the silly side,” he says. “We’re telling people to stay out of the weather, and we’re the ones racing into it.

“I think the most interesting thing is covering people’s resilience. They’re throwing all their personal belongings into a dinghy or whatever they can find that floats. They’re trying to rescue what they have left, not knowing what the damage will be until they come back when the water subsides. You’re capturing a moment in their lives that’s a low point, but without covering those personal moments, I don’t think it really hits home for those watching.” 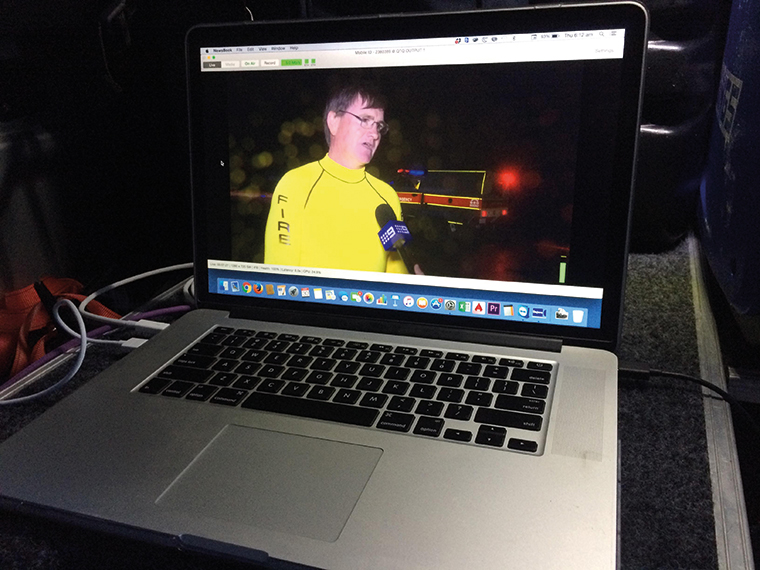 Oklahoma’s storm chasers
“Weather is quite the business where we are,” jokes Todd Spessard, VP of content for Griffin Communications. The regional broadcaster, based in Oklahoma, US, boasts TV, radio and outdoor advertising, and is still under the same family ownership it had when it launched in 1951.

Oklahoma takes its weather very seriously. In 2013, the state experienced the El Reno tornado, the widest in recorded history with winds measured at 484 kilometres per hour.

“Our stations have always been at the cutting edge of technology, going back into the 1960s and 1970s, because this has always been a weather-driven market,” says Spessard. “And a lot of times, it really is life or death.”

Griffin Communications was one of the first broadcast companies to use radar for weather reporting, and one of the first to use colour radar, as well as being a pioneer in tornado forecasting.

“I don’t think it would be overstating it to say that the idea of storm chasing started in Oklahoma City, in terms of people going out and finding the storms and showing video as a way of warning people what’s coming,” says Spessard. “We’ve been doing that for years.”

Griffin even created its own technology, using satellite to transmit video from storm chasers back to local stations. It was built on a similar concept to bonded cellular technology, but used cellphones to satellite.

“At the time it was great, but compared to what you can do now, it was elementary. The video would break up a lot, you would lose frames, it was slow. But back then it was awesome, because nobody else was doing anything like it,” explains Spessard.

In the last few years, the company has found bonded cellular technology to be the way forward in its live weather reporting – as well as its regular news coverage. Griffin was an early adopter of the Teradek and LiveU, and is now using Dejero.

“We’ve sold our satellite trucks. We still have a couple of ENG trucks, but we only use those where the mass of people with cellphones at a location is so great that the bonded cellular struggles a little bit. But as the cell towers put up more connectivity, it gets easier and easier,” adds Spessard. 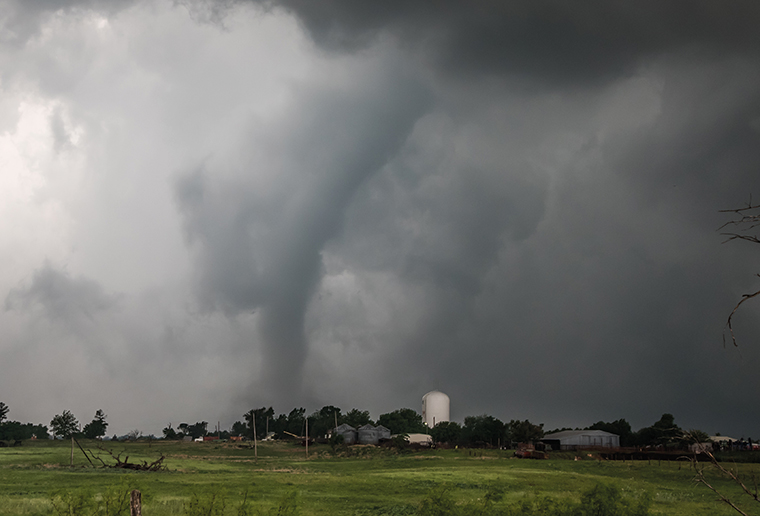 Being part of the coverage
The storm chasers contracted to Griffin now stream continuously, from waiting in the truck for a storm to break to the major weather events. Social media is a big part of their coverage and a few of the storm chasers are household names. Geared up with cellular bonded units, they are spread all around Oklahoma. The network also employs them for other remote coverage, including stories on the state’s not-infrequent wildfires.

“This livestreaming coverage really makes people feel like they’re part of it all. Right now we have 30 bonded cellular units, so that’s 30 different people who can be streaming at the same time if we need it. It’s really increased our ability to be there to cover the event. It’s increased the quality of the coverage,” says Spessard.

In the Griffin studios, the weather team uses data and forecasting from Baron, which provides weather intelligence to businesses, governments and consumers. Newsroom workflows are built entirely on Avid. Griffin is also one of the only networks in the US that has its own dual-polarisation radar system for tracking weather.

“This technology has transformed our industry,” says Spessard. “I sometimes think technology has reached a point where it will plateau because I’m not sure what else we would want to do, but it wouldn’t surprise me if in a few years everyone is shooting on a 4K smartphone.”