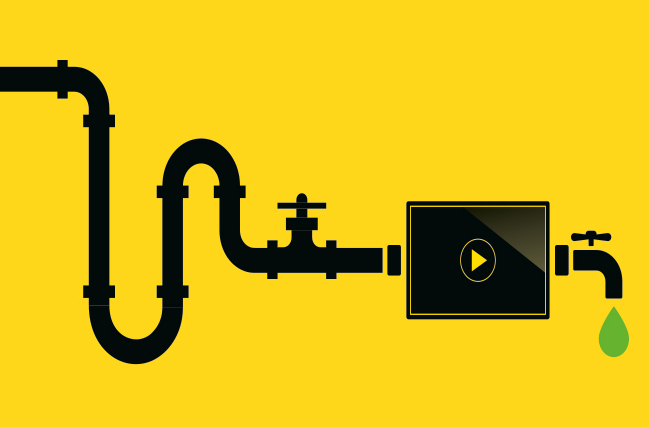 Watching TV is not a green habit. And online TV is less Earth-friendly than old-school broadcasting. How do we make streaming sustainable?

Digital technologies are generating an increasing amount of the world’s greenhouse gases, with much of this energy consumed by data centres and network infrastructures. And things are only set to get worse. The energy consumption of digital technology is increasing by as much as 9% per year, and a recent forecast by Ericsson Mobility Report estimated that video streaming will represent about 75% of annual mobile network traffic by 2024. That translates to 102 exabytes, or 102 billion gigabytes.

But why does online TV viewing consume so much? Well, it is personalised, with each viewer getting a different video package based on what screen, operating systems and preferred resolution the viewer is using. Also because of new ways of consuming TV – including replay and time-shift. And partly because of better image quality – think Ultra-High Definition, High Dynamic Range and 4K. These three things combined mean we need more storage and more bandwidth – and so we produce more greenhouse gases.

In an ideal world, we would all stop watching and go outside. Unfortunately, many of us are addicted to TV. Does Anevia really expect to change that? We don’t. We assume that it is easier to change ourselves than to change others, and that is what we have been focusing on: finding ways to reduce the environmental impact of our industry through resource optimisation.

Our aim is to optimise storage efficiency and reduce bandwidth requirements by at least 30%. We are also striving to reduce the infrastructure cost by avoiding a multiple transcoding profile. And there is further potential to reduce the energy consumption in data centres by using artificial intelligence.

A private cloud deployment can still use huge amounts of resources. So we have developed solutions to reduce that.

Highly efficient encoders – though perhaps priced slightly higher – are a responsible investment. Ours use an efficient encoding algorithm, which reduces by 20% the data that needs to be delivered every second for a given quality of image. When this is multiplied by millions of subscribers, and by the number of seconds in a day, the result can be a huge saving in terms of bandwidth – meaning less energy is consumed and fewer routers need to be deployed.

Our technology uses the same servers for streaming and storing content, halving the number of physical rack units needed. Our shared workflow approach allows TV service providers to use the same video data for live, start-over, catch-up and cloud DVR (digital video recorder). This significantly reduces the use of storage and network bandwidth requirements.

Carefully implemented resource sharing allows a single server to be used for multiple functions instead of being dedicated to a single role. Video traffic fluctuates, from huge numbers during a mid-afternoon sports final to almost zero at 3am. TV service providers generally deploy over-capacity so they can meet peak demands with high quality. Most of the time, 94% of their capacity is wasted. Using our recently introduced CDN (content delivery network) technology, they can build an elastic CDN so they can switch nodes on or off, and assign the unused nodes to other tasks, such as file encoding for VOD or for dynamic ad insertion.

The bad news: TV channel operators have not shown much interest yet in green OTT. The good news: they do want cost efficiency. Since resource optimisation reduces costs, that creates an indirect demand for green OTT.

Telecom Argentina, Post Luxembourg and Netplus have all adopted our technology – reducing the environmental footprint of their service platforms, while also increasing their efficiency.

We will not stop people from watching TV. But we are proud to help our customers deploy the technology that makes this habit that much greener.

The UK House Of Lords has published its report Digital Technology & the Resurrection of Trust, on tackling the problem of online #disinformation aimed at disrupting democracies. See our August issue for more & read the entire report here: